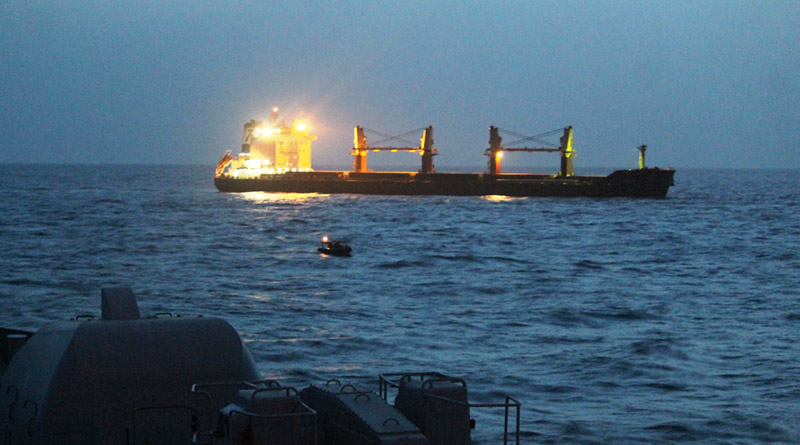 On 25 August 2018, INS Teg, a warship of the Western Naval Command, received a call from a Combined Task Force aircraft whilst patrolling in the piracy infested waters of Gulf of Aden, for providing assistance to MV Vela, a Norwegian owned ship with an all Indian crew. The vessel was in distress as her Port Anchor along with the entire 330 metres cable weighing approximately 42 tons had inadvertently slipped and was hanging into the sea. The falling cable severely disabled the ship with her speed being restricted to 5-6 knots, thus making her vulnerable to piracy attacks, apart from being a navigational hazard for herself as well as for other ships in the dense shipping corridor.

INS Teg promptly dispatched a specialist team to carry out an assessment of the situation and provided assistance for recovery of the anchor and cable. The team was led by the ship’s Engineering Officer and comprised the other specialist officers, Seamanship Instructor, Anchor Chain Cable Specialist and Machinery Specialist.

Concerted efforts over three days finally resulted in the successful recovery of the anchor along with the entire 330 metres of cable. This assistance from INS Teg not only ensured onward safe voyage of MV Vela, which had to subsequently transit through the constricted waters of Red Sea and Suez Canal, but also averted huge financial loss.

MV Vela and the Combined Task Force were quick to express their gratitude to the ship and the Indian Navy via emails: Mails received from various agencies: MV VELA

“Your concern and commitment for safety of life at sea is well noted and your efforts in reaching out to fellow mariners in emergency at sea, keeping aside committed voyage is conforming to the best maritime traditions; worth emulating by other mariners. I hereby convey my sincere appreciation for your concern at sea and in GoA area, and efforts to provide assistance. I am very sure that under your able command and with such energetic crew, MV Vela salute to the Indian Navy”

I hereby convey my sincere appreciation for your concern at and efforts to provide assistance by your Commanding Officer and staff for retrieving the anchor on 28 August 2018. MV Vela salute to the Indian Navy.”

COMBINED TASK FORCE (CTF 151) “Our thanks to the INS TEG crew for the proactiveness in responding to the MV Vela situation.”