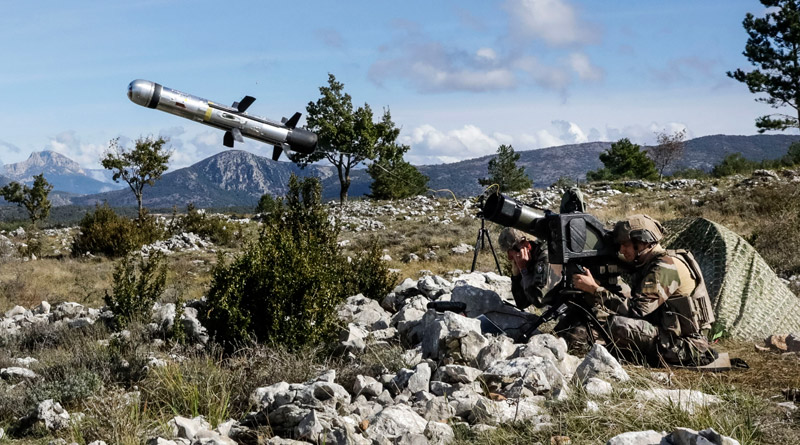 Paris, Nov. 14: The French Army and MBDA arranged for 15 members of foreign delegations witness the full the full range of capabilities of MBDA’s 5th generation MMP (Missile Moyenne Portée) ground combat missile during a live firing demonstration. Representatives of the European Defence Agency (EDA) and of the NATO Support and Procurement Agency (NSPA) were also given the opportunity to witness the live firing.

The demonstration which was organised on 12th October 2018, at the Canjuers base in the presence of the French Army and the Direction Générale de l’Armement (DGA) – took place in two phases. The first was a dynamic phase in which representatives from around the world watched three firings conducted by the French Army Technical Section (STAT).  Another phase – the static phase which saw presentations and workshops making use of standard operational equipment for simulations, training and support.

The three firings – all of which struck their targets precisely – showcased the missile’s various operating modes by confronting it with different scenarios, against both fixed and mobile targets at ranges of 2.5 km to over 4 km, proving the accuracy of the MMP in all circumstances, even when fired at hidden targets beyond line of sight.


The demonstration, which included firings with the seeker locking on to the target both before and after launch, and using both infrared and TV guidance, also highlighted the MMP’s ‘fire and forget’ and ‘operator in the loop’ capabilities.

Its ability to engage targets beyond direct line of sight by means of a network-centric enabled tablet computer, or via images relayed by micro-UAVs, was also demonstrated, illustrating how the MMP operates in conjunction with coordination systems and field sensors.

This demonstration follows on from September’s hot weather campaign carried out by the French Army in Djibouti, which validated the MMP’s suitability for use in a desert environment and secured the green light for its deployment in support of the Operation Barkhane in the Sahel-Saharan Strip.

MBDA is a European group offering a range of 45 missile systems and countermeasures products already in operational service and more than 15 others currently in development with various militaries around the world.