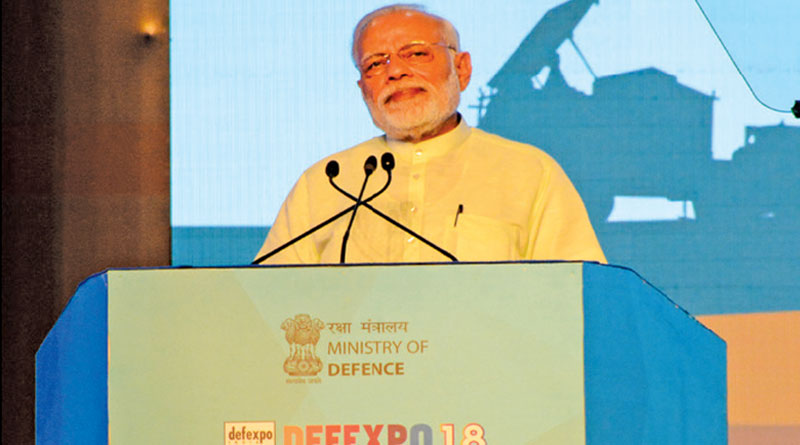 Chennai: With the push of a button, Prime Minister Narendra Modi launched yet another acronym IDEX at the official inauguration of DefExpo 2018 on April 12. Meant to promote start-ups in the defence and aerospace sector, IDEX which stands for Innovation for Defence Excellence, fits in nicely with the prime ministerial drive towards making in India.

Post the launch of IDEX, the breathless emcee urged the Prime Minister to ‘guide us’ and ‘show us the way forward.’ Who can resist a fan? Certainly not Prime Minister Modi who finally took the mike to deliver what can best be summed up as a report card of his last four years. With dazzling statistics at his fingertips, he mesmerised the audience by telling them in brute numbers how much has been achieved by his government in the last four years.

To those who harboured doubts about the delivery on promises made so far, he said, “We want to move fast, but we don’t want to take short-cuts.” And the reason why his government has not been able to convert his vision into pragmatic policy is because, “There were issues created by the previous government, which are being resolved now,” he assured the assembled gathering of global original equipment manufacturers, Indian industrial heads, foreign and Indian military delegates, as well as the media.

As evidence of resolution of pending issues, he presented the audience with two key exhibits: the recently placed order for bullet-proof jackets and the issuance of a new request for information for 110 fighter aircraft for the Indian Air Force. With this, the Prime Minister laid out his vision for defence manufacturing in India, where there will be room for everyone, the public sector, the private sector and the foreign OEMs.

Two, the emcee urged the audience to ‘show their love and gratitude’ for the prime minister by giving him a standing ovation. The select members of the audience responded by repeatedly shouting ‘Bharat Mata ki Jai’ (salutations to mother India) as the Prime Minister walked in and later when he finished his speech.

Three, the ceremony was followed by a live three-dimensional demonstration, encompassing air, land and sea on the beach. It was organised well and the blue of the ocean made it more picturesque.

And four, DefExpo is no longer a land, naval and internal security show. It has now evolved into a Show across the three military domains, ‘land, aero and naval’ that is meant to showcase India as a hub for defence manufacturing – from an importer to the exporter of defence equipment.

While this is a dream worth nurturing, perhaps it would thrive better if one could let go of public display of obsequiousness and show a little more regard for the time of other people. In a Show that lasts a mere three days, if a day and half is taken up by high level political visits, especially in a country like India where even wannabe politicians stop traffic, then clearly not much professional activity can take place.

India may be a big market for the global industry, but wouldn’t it be nice if it was a market of choice not necessity.