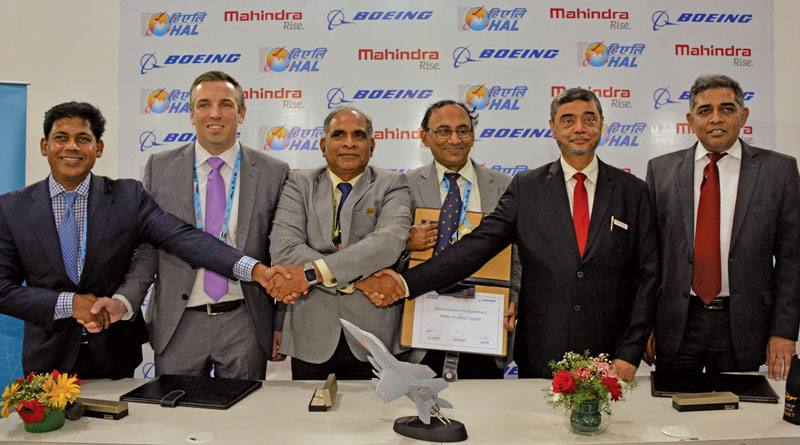 Chennai: In what would silence the critics of the Strategic Partnership model envisioned in the Defence Procurement Policy 2016, India seems to have made the maiden breakthrough. Three major giants in their own rights – Boeing as the proven world-class integrator of technologies, HAL as India’s premier aerospace company and Mahindra Defence, whose footprints are discernible in aircraft flown in 31 countries – joined hands today to manufacture the next generation Super Hornet (F/A-18 E/F Block III) under the Make in India policy.

According to the Chairman HAL, Suvarna Raju, “Boeing will supply the technology, which would be digested by HAL by providing its design expertise, facilities and services, and Mahindra Defence would contribute with its manufacturing expertise.” President Boeing India, Pratyush Kumar ensured that his technology partners, namely, GE, GKN, Raytheon and Northrop Grumman, were represented at the announcement to share the limelight.

Replying to FORCE’s query, Raju said that the first step in the Made in India Super Hornet would be to create the defence ecosystem (where India and the US would work together) simultaneously as the technology absorption and production of the fighter aircraft starts in India. In the next step, the acquired capabilities would be utilised indigenously. Left unsaid was that the Light Combat Aircraft Mark I would gain from this awesome partnership to telescope its production. To another question, Raju said that additional facilities could be created (since HAL with the responsibility of ramping-up of 83 LCA production) for Super Hornet-India.

Conscious of the pivotal role of the government, Pratyush Kumar made it known in his initial remarks that Boeing had started its discussions on this strategic partnership with the defence ministry two years ago. Given the fact that Boeing is perhaps the only foreign defence company in India with a proven business strategy, it seems to have made good headway with the government.

Boeing, after all, has already created an impressive ecosystem in India with an annual turnover of one billion dollars. This is in addition to its products which have entered the India Services’ inventory, are in the pipeline, and those which are strong contenders like the Integrator (tactical unmanned aerial systems) and the air-tanker KC-46 A (with capability to carry two different fuels). And not to forget the political heft that it brings to India at a time when relations between India and China are not the best.