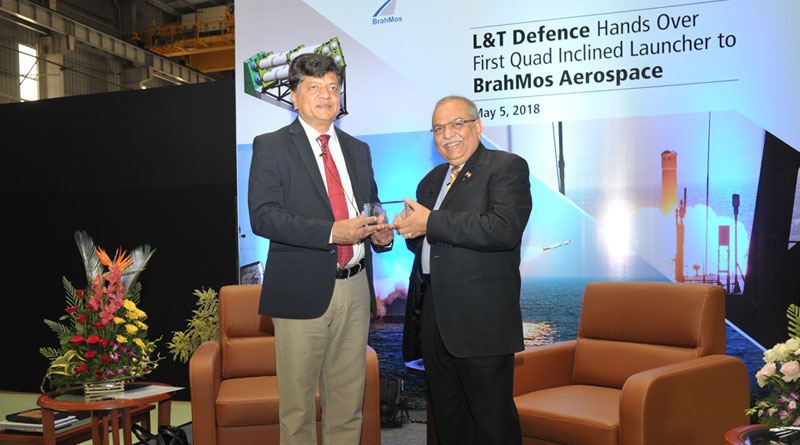 After successfully completing the design and prototype realisation of the ‘Quadruple Canisterised Inclined Launcher’ (QCIL or Quad Launcher) for BRAHMOS missiles and after trials, L&T Defence, the defence arm of Larsen & Toubro (L&T) has handed over the prototype Quad Launcher to BrahMos Aerospace Private Ltd. (BAPL).

According to a joint statement issued by the two companies, the Quad Launcher is designed for launching BRAHMOS supersonic cruise missiles in an inclined configuration on-board Indian Naval ships. The launcher provides superior firepower as compared to the twin canister, deck mounted launchers and has a capability to support and launch four missiles in a single or salvo mode. The new Quad Launcher is suitable for warships which have space constraints to accommodate a Vertical Launch Module.

The QCIL prototype was handed over by Whole-time Director (Defence) and Member of L&T Board Jayant Patil to  Director General (BrahMos) DRDO and CEO & MD, BrahMos Aerospace, Dr. Sudhir Mishra at an event held at L&T Defence’ Strategic Systems Complex near Pune. The production units of the Quad Launcher will be ready for deployment on Indian Naval Ships in next 18 months.

“We have been associated with the development of BRAHMOS missile programme since 2000, when as part of the composite team led by DRDO, we engaged with the Russian Federation and embarked on this vast project. As proven partners of all variants of Naval missile launchers for BRAHMOS, we took up the design of the unique Quad Launcher and realised the prototype in 18 months. The Launcher underwent rigorous testing, including by the NPOM specialists, prior to receiving of production clearance. L&T will now take up the bulk production of the Quad Launchers,” Jayant Patil said.

Director General (BrahMos) DRDO and CEO & MD, BrahMos Aerospace on receiving the new launcher said, “BrahMos has taken an exemplary lead in the Indian Government’s ‘Make-In-India’ drive. In fact, BrahMos Aerospace practices ‘Design-In-India’ – the next level of ‘Make-In-India’, which has resulted in the establishment of a consortium of over 200 industries involved in the design, development, testing and production of various systems and sub-systems for the universal BRAHMOS missile and its various ground / air / sea based systems.

“The BrahMos concept of ‘Mind-to-Market’ has led to technology development along with skilled manpower creation and a huge business, thus leading to in- country wealth generation. Our major partner L&T is an ideal example of ‘Design-In-India’ and ‘Make-In-India’ today.”