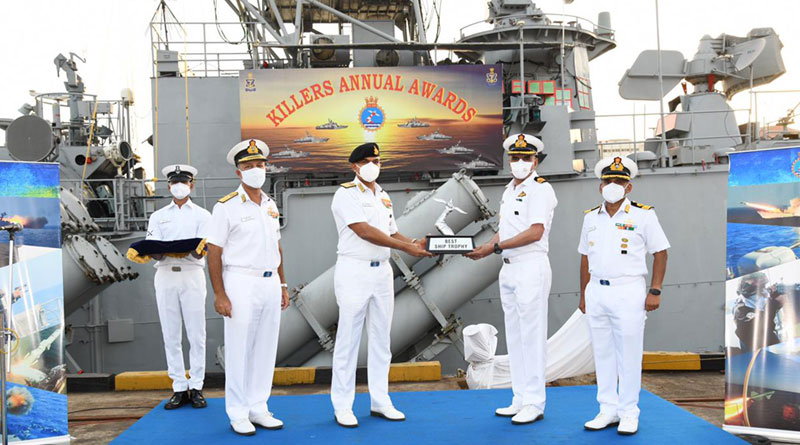 The ships of the 22nd Missile Vessel Squadron, the current avatar of the missile boats that caused havoc in Karachi in December 1971, had their Annual Awards ceremony on 28 May 2021 at the Mumbai Dockyard.

Aptly called by the epithet ‘Killers’, these sleek and swift ships are the first to go into harm’s way and are the ‘first strike’ elements of the Indian Navy. They live by the singular aim and motto of ‘Hit first and Hit hard’. In fact, the Navy Day each year is celebrated on 4 December to commemorate the heroic acts of these very brave-hearts.


Flag Officer Commanding-in-Chief, Western Naval Command, Vice Admiral R. Hari Kumar gave away the trophies to the deserving ships which are based in Mumbai under Flag Officer Commanding Maharashtra Naval Area, Rear Adm. Atul Anand. Himself a ‘killer’, the Commander-in-Chief exhorted the ships to keep their powder dry and be ready to strike fear amidst the enemy when called upon to do so, in pursuance of the rich legacy that the ‘killers’ have inherited from their glorious predecessors.