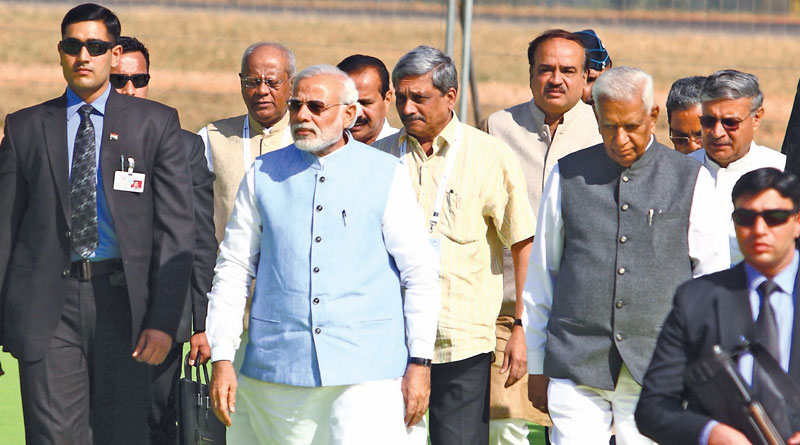 Bengaluru: After a brief scare about change of location, rumours about the Show being held months before its scheduled date or being cancelled, here we are at air force station Yelahanka for the 12th edition of Aero India. There is something deeply comforting about familiarity, no matter how much inconvenience those familiar environs cause. So, for now, we will rejoice in the existence of Aero India at Yelahanka, holding the criticism till after the Show.

The Show itself seems to have come full circle; once again it is being organised by Hindustan Aeronautics Ltd, which used to do it in its early editions before the ministry of defence starting experimenting with it in a bid to make it jazzier on lines of international shows. Once it was outsourced to Farnborough International Ltd, thereafter to Indian industry associations like CII and FICCI before the MoD decided to do it on its own through Defence Exhibitions Organisation (DEO). Last year, before DefExpo 2018, DEO was subordinated to Hindustan Aeronautics Ltd (HAL), which rose to the occasion at some cost.


“If the minister asks us, how can we say no?” a middle level HAL official had told me last year during DefExpo in Chennai. “But if we have to devote so much of our human resource and time to organising a Show, some of our other work will take a backseat.” Hopefully, that some other work didn’t involve HAL’s commitments on Indian Air Force’s fighter upgrade programmes or the Light Combat Aircraft! Since Aero India is a biennial event, 12th edition implies that the show is over two decades old. Yet, in its unpredictability it remains an adolescent, quite like its sister show DefExpo. Nothing about it is predictable — dates, venue, organisers and even the nature of the show.

This year, the theme of the Show is, ‘the runway to a billion opportunities’. Clearly, you cannot get more inclusive than that. It has co-opted the ministry of civil aviation as a partner. Yet, interestingly, the show remains the MoD’s baby with the minister’s and the Prime Minister’s faces beaming from the website. Identity crisis has been another hallmark of the Show, owned and run by the MoD. But this is not the time for such nit-picking.

Aero India 2019 would be the last edition of the show under the present Narendra Modi government. In February 2015, nine months into his premiership, Modi had come to Yelahanka to inaugurate it. While he certainly raised the level of the Show by giving it prime ministerial time, he did so, because he wanted to convey to the global defence industry that defence manufacturing was the nucleus of his ‘Make in India’ programme. The hardwired lion layered with blue and black missiles had then boldly adorned the venue. ‘Make in India’ became the salutation with which people greeted one another.

However, four years hence, the lion has aged. While old timers still talk about it out of sheer nostalgia, they realise that the lion now lives in the zoo, dependent on its caretakers for its meals. It is no longer able to hunt for itself. This week it will be interesting to see what the lion managed in the last four years. After all, stocktaking is a routine activity in the election year. Perhaps, there will be new announcements, perhaps, there will be claims. But the sheer statistics

To be honest, nostalgia would be the dominant sentiment this time. The Indian Air Force’s Multi Role Combat Aircraft competition is back, but without the verve of the earlier times. Age and fatigue afflicts the competition, which is further hamstrung by ‘been there done that,’ syndrome, except for the newcomer Su-35, who joins the veterans of the race.