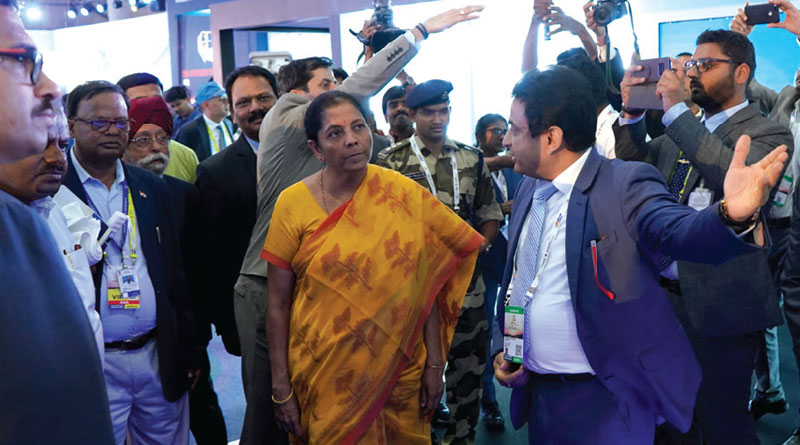 Yelahanka: A moment’s pause and respect for young Wg Cdr Sahil Gandhi who met with the fatal accident a day before the Show doing what he loved: Flying the formation of Indian Air Force’s Surya Kiran aerobatic team.

Aero India 2019 opened on a note confusion, and thereafter spun a web of selective facts, exaggerations, and contradictory statistics. The confusion began even as the ministerial entourage led by defence minister Nirmala Sitharaman and accompanied by minister for civil aviation Suresh Prabhu was climbing up the stage. The emcee announced that the chief minister of Karnataka H.D. Kumaraswamy would join the dignitaries shortly on the stage. But he was already there, bringing up the rear. Once everyone was settled on the stage, including defence secretary, the three service chiefs and secretary DRDO, the emcee invited secretary defence production to give the welcome address.

Glances were exchanged. Defence minister Sitharaman urged her junior minister Subhash Bhamre to give the welcome address instead. Thereafter aviation minister Suresh Prabhu was invited to deliver the keynote address. Prabhu did a fast work of his address. The civil aviation sector has been growing at the rate of 20 per cent every month for the last four years he said, a measure of which was the addition of 100 airports. His government has also made air travel affordable to such an extent that even villagers can now travel by air. The irony that despite the growth in the aviation sector, various Indian airlines have been facing grave crisis, thereby raising questions about this lopsided growth, escaped his attention.


Yet another keynote address was delivered by the chief minister who took this opportunity to underline the importance of Bengaluru and Karnataka as aerospace and defence hub in India and the measures that his government had taken to facilitate this, including the creation of aerospace special economic zone.

The chief minister had barely finished, when his predecessor and now Union minister of statistics and programme implementation D.V. Sadananda Gowda arrived on the stage. When the emcee invited the defence minister to give her speech, she declined, inviting Gowda to speak instead. Probably unprepared, Gowda expressed happiness for being at Aero India and urged everyone, from exhibitors to visitors, to enjoy the show.

Finally, the defence minister took the podium, and Aero India got off to a flying start, primarily on the wings of the statistics that she began to churn out. The first off-the-block was the participation figures at the show — 600 Indian and 200 foreign companies. It’s another matter that the Aero India website lists total exhibitors as 403. The other baffling figure was of defence exports, which according to her had seen an increase of 400 per cent in the last four years; and the recipients of this included countries like Russia and Israel among others. Not only this, she claimed that India has manufactured 4,000 aircraft so far. Her list included platforms like the C-295 that have not even been signed for as yet. At least, the OEMs waiting to see the end of protracted negotiations would have been pleased with this.

Earlier, while welcoming the presence of her Cabinet colleague Suresh Prabhu, she declared that for the first time Aero India had joined hands with civil aviation. “This makes this edition of the show truly unique,” she said. In 2017, her predecessor Manohar Parrikar had jointly inaugurated 11th edition of Aero India with the then civil aviation minister Ashok Gajapathi Raju, even as the minister of state for civil aviation Jayant Sinha had cheered them.

But why quibble over the past when future beckons.

One thought on “Free With Figures”