When You Have Such a Product, Everyone Wants it. We Are in Serious Talks With Three or Four Countries Who Want to Buy This Missile 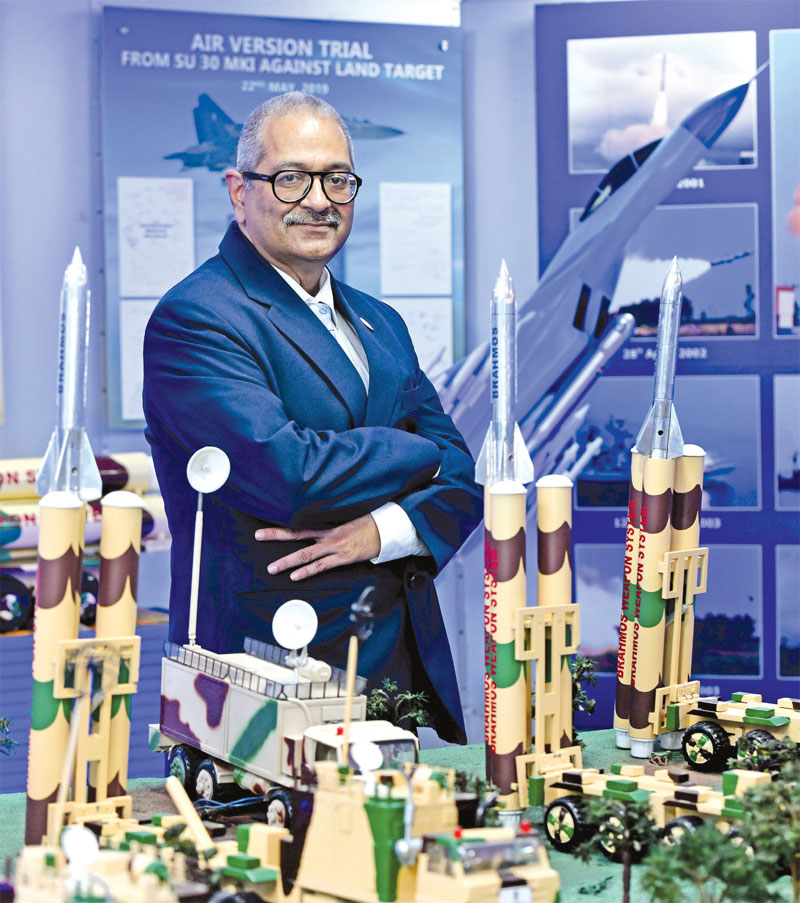 How can exports be encouraged in BrahMos and DRDO?

It is great that the Philippines deal took place. The Philippine Department of National Defence had shown interest for quite some time. In fact, BrahMos has been in contact with them since 2008-2009, so it did not happen overnight. Finally, they needed a potent weapon and BrahMos was an obvious option. We thought that the Philippines would use the Line of Credit (LC) that India had given them, but they decided to use the LC for something else, we hope for more BrahMos. They are buying from us for the Philippines Marine Corps.

That is the prerogative of the Philippines. Our task is to complete the delivery in the stipulated time frame.

The Philippines Army also has shown interest. There is hardly any difference between the navy and the army configuration. Our system is universal. The same missile can be used for anti-ship as well as for land attacks. The Philippines Army, at present, wants missiles that are identical to the Philippines Marine Corps. They intend to equip the first regiment with the anti-ship version.

As of now, the contract has been signed and the notice to proceed has been received and very soon, the hardware will start flowing.

Many countries have spoken to us. The joint venture was originally created with the idea of producing anti-ship missiles and marketing them to friendly countries, depending upon country-to-country agreements. Many years back in 2001, when we participated in LIMA Malaysia, there was an interest in the capabilities and whether what we were claiming were actually true. The naval chief of one country, who had attended the show remarked, “I don’t want to be on the other side of this missile, I want to be on the side of this missile.” Basically, when you have such a product, everyone wants it. We are in serious talks with three or four countries who want to buy this missile. In addition, we are in preliminary talks with another five or six countries.

Is there room for improvement in the delivery, both for ourselves as well as the export market?

Our users are content with the numbers they have currently. They still need and we still have several deliveries for them. But they have enough to take care of our country, currently. Former defence minister Manohar Parrikar had once suggested that even when we are producing to fulfil our users’ needs, we should keep five percent of the production line open for exports, provided we find a market.

Luckily or unluckily, we didn’t find a market, so everything was pumped in for our users. Now that we have found a market, our production lines are working in shifts, and we have the capabilities for expansion as the Integration centres were planned with futuristic export orders in mind which has ensured that we will be able to fulfil all commitments on export.

Can you give an overview of BrahMos facilities across the country today? Would you want anything additional for exports?

Our major production centre is in Hyderabad. Then we have one in Nagpur. There’s one more unit we have started in Pilani. Defence minister Rajnath Singh laid the foundation stone on 26 December 2021 for a BrahMos Production Facility on 200 acres of land in the Uttar Pradesh Defence Corridor, on the Lucknow-Kanpur highway. We aim to factor that too for our future production. I recall his resounding and powerful words, “India wants to manufacture the BrahMos missile and other weapons not to attack any other country but to defend its people from any nation with hostile intentions.”

We are constantly improving in terms of accuracy and performance. We have already started our work on a newer version, which we have been showcasing all over by taking it to at least 10-12 exhibitions over the last three-four years. It is the BrahMos-NG (Next Generation).

The key things that we are looking for in the BrahMos NG is that it should be smaller, stealthier, faster. We would like to incorporate anything that applies to an Olympics athlete to this missile. It should be swifter, higher, stealthier. That is our motto. The article will be lighter, so that it can be fitted onto more platforms. Right now, on the Su-30, it is under the belly. It can’t be put on the wings because it’s too heavy. We want to make it lighter and put it on the wings. If it is lighter, we can in fact even put it on LCA, MiG-29 or any other platforms. That is for the air force to decide. The LCA would be our main aim, because then we could sell a package. When you buy the Su-30 or Rafale, it comes with its armaments. Why not start selling the LCA with the armament? The moment you make a sale of the LCA, by the way of increasing exports, we can give air-to-air missile Astra and BrahMos-NG (if it is ready by then). It is a way to start.

BrahMos-NG has been envisioned as a smaller and lighter, yet smarter weapon system having more versatility, lethality and flexibility along with ultra-precision for deployment on-board a wide range of military platforms, aerial as well as naval. Key features of the missile are—reduced dimension and weight for widespread usage; advanced next-generation stealth, greater effectiveness against ECCM, higher versatility in underwater combat applications, launch readiness from torpedo tube and vertical orientation. The miniaturised missile could also be deployed in land-attack configuration.

One of the biggest problems we have on exports is the stiff competition we have from the ‘haves’. I use that word for the ones who already have exports. Exports sound great. In terms of the Philippine deal, from the USD 375 million deal, we are taking a pittance of the profit. That is because we want to get into the market. We will think of the profits later on, or even plough back the profit into something else, if at all there is any. Once, the strategy was that even if it is at a bit of loss, at least put the foot in the door. Once your Indian weapon is seen as reliable in terms of after-sales support and maintenance, an ecosystem develops.

We should be looking at the indigenisation percentage going up, even to the extent of the propulsion. Why get the propulsion from Russia and why not get the Transfer of Technology (ToT) here? What are the plans on that?

As per the new policy, for defence equipment which has a foreign OEM content, we have to start reducing the foreign OEM content. This also applies to all DRDO designed systems. In fact, with the negative list, there is a huge step. It’ll help create an internal base. Once we have an internal base working, we can think of stepping up and moving to exports. Both these things go hand in hand. Exports are not possible without indigenous content, and indigenous content is not possible without looking at foreign partners. Regarding the indigenous content in BrahMos, we have reached a stage of saying that we could be 70 per cent but that 70 per cent is also with a lot of difficulty. BrahMos that way is in itself an industrial complex, where we have about 200 companies working with us.

How many of the 200 companies are involved in the guidance system, which is our main contribution?

About 20-25 Indian companies are involved as vendors and sub-vendors for the guidance system.

BrahMos doesn’t have an R&D per se. It is an integration. How did we get there? We had design partners. We asked them to work on improvements. If BrahMos is making any profits, these profits are ploughed back to the designers. We give money to DRDO and NPOM of Russia. They design and then we go to the industry. It is the DRDO– industry synergy on how the R&D synergy is moved forward. Even in case of indigenisation, BrahMos has an indigenous content. But it has been designed by DRDO, along with the industry.

BrahMos will have to move ahead in terms of the engine. From ramjet it may have to go to hypersonic, maybe. Why is it for the DRDO to decide, why not BrahMos?

BrahMos is a joint venture of two technological partners. DRDO and our Russian partner NPOM work in tandem for the improvements of the BrahMos product. When the time is right and the technologies mature a decision will be taken.

BrahMos is a success story. One key reason for that is that it became independent of the DRDO. Why don’t we have other things working in the same manner? Why can’t we do that?

As stated, BrahMos is a successful Joint Venture through a wonderful synergy created between the joint venture partners in providing technology towards the design and involving the industry of both countries. The model was meant to work from Day One. The model can be and should be tried out in various domains in the future.

I can add that there is not a single country who owns aircraft manufacturing on their own. They are all joint ventures. Maybe it’s time for us to go into a joint venture in other areas of defence technology and systems.