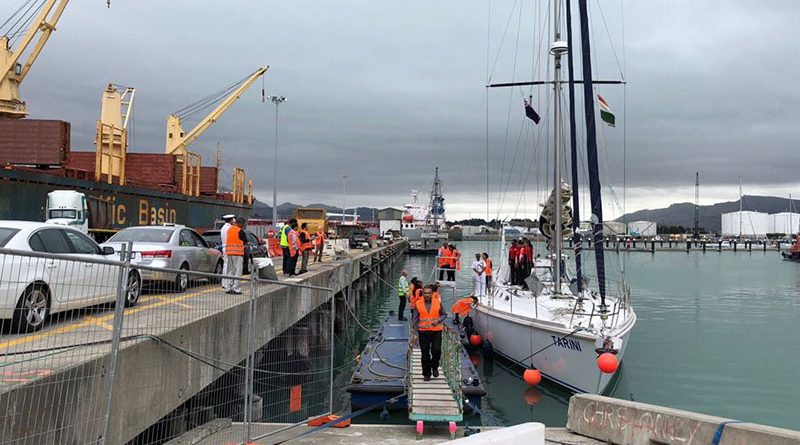 The Indian Naval Sailing Vessel (INSV) Tarini left Lyttelton on December 12 for its onward journey to Port Stanley (Falklands). INSV Tarini had arrived at Lyttelton on 29 November 2017 after completion of second leg of its maiden voyage to circumnavigate the globe. This historic circumnavigation attempt by an all-women crew is being led by Lieutenant Commander Vartika Joshi, and the crew comprises Lieutenant Commanders Pratibha Jamwal, P. Swathi, and Lieutenants S. Vijaya Devi, B. Aishwarya and Payal Gupta.

The crew of INSV Tarini was officially welcomed to Lyttelton by Andrew Turner, deputy Mayor of Christchurch on 29 November 2017. The crew was also welcomed in the traditional Maori culture by members of the community.

Member of Parliament from Christchurch Central, Duncan Webb also visited the vessel to welcome the crew. The crew had several engagements during its stay in Lyttelton, including call-on meeting with Mayor of City of Christchurch, Lianne Dalziel. The National Council of Women of New Zealand also hosted the crew for an interaction.


INSV Tarini crew had an opportunity to interact with a wide range of stakeholders during the welcome reception hosted by the High Commission on 30 November 2017, which was attended by about 100 distinguished guests, including members of Parliament, state officials, businessmen, academicians, leaders from Indian community and media persons.

INSV Tarini was open to visitors at Lyttelton Port of Christchurch (LPC) on 3 December 2017. Nearly 200 visitors visited the vessel and interacted with the crew. The crew was also welcomed by the city of Christchurch during the traditional festive march, known as the ‘Santa Parade’. More than 200 school children attended a presentation and interaction session with the crew at Prebbleton School on 5 December 2017.

The crew also visited the Naval Point Yacht Club, Canterbury and Ara Institute, NZ where a presentation on ‘Navika Sagar Parikrama’ was given to the audience. The crew visited the traditional Maori cultural centre, ‘Rehua Marae’ during the port stay. The crew also had a trip to few tourist places near Christchurch, including Hanmer hot springs and the French harbour, Akaroa.