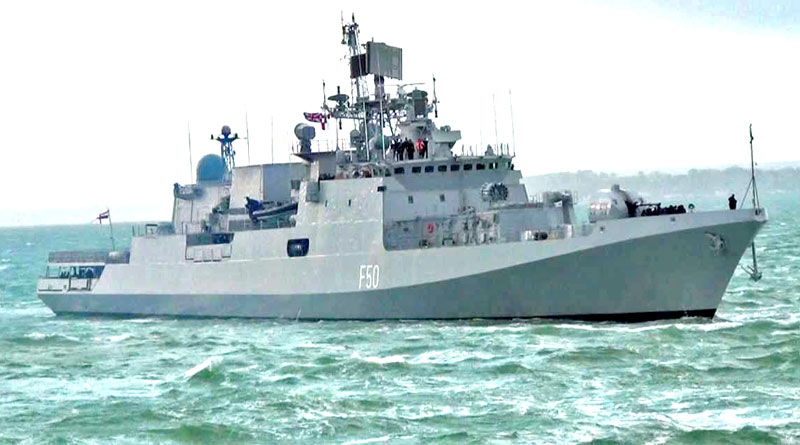 Indian Naval Ship Tarkash made a port call at Walvis Bay, Namibia on 15 September 2019 for a three-day visit in continuation of its Africa deployment

In continuation of the Indian Navy’s overseas deployment to Africa, Europe and Russia, Indian Naval Ship Tarkash made a port call at Walvis Bay, Namibia on 15 September 2019 for a three-day visit. “The port call by INS Tarkash at Walvis Bay is a demonstration of India’s warm ties with Namibia and its commitment to enhance operational reach, maritime security and its solidarity with friendly nations,” the Indian Navy said in a statement.

INS Tarkash commanded by Captain Sathish Vasudev, is a state-of-the-art warship of the Indian Navy equipped with a versatile range of weapons and sensors capable of addressing threats in all the three dimensions. The ship is part of the Indian Navy’s Western Fleet and is under the operational command of Flag Officer Commanding-in-Chief, Western Naval Command, based at Mumbai.


“During the visit, the Commanding Officer of the ship will pay courtesy calls on Namibian dignitaries and senior defence officers, including the Chief of the Namibian Navy. Professional interactions are planned with the Namibian Navy towards further enhancing co-operation between the two forces. In addition, social engagements, exchange visit of ships, sports event and sharing of best practices are also organised,” the statement added.

India and Namibia have enjoyed warm and friendly bilateral relations sharing common values of democracy, development and secularism. A number of bilateral arrangements for co-operation and military exchange exist between the two countries. As part of its defence cooperation, India, over the years, has extended training to a large number of Namibian military officers in various military institutions.

Indian Navy ships are regularly deployed as part of Indian Navy’s mission of building ‘bridges of friendship’ and strengthening international cooperation with friendly countries as well as to address maritime concerns across the globe. The current visit seeks to accentuate India’s peaceful presence and solidarity with friendly countries and, in particular, to strengthen the existing bonds of friendship between India and Namibia.