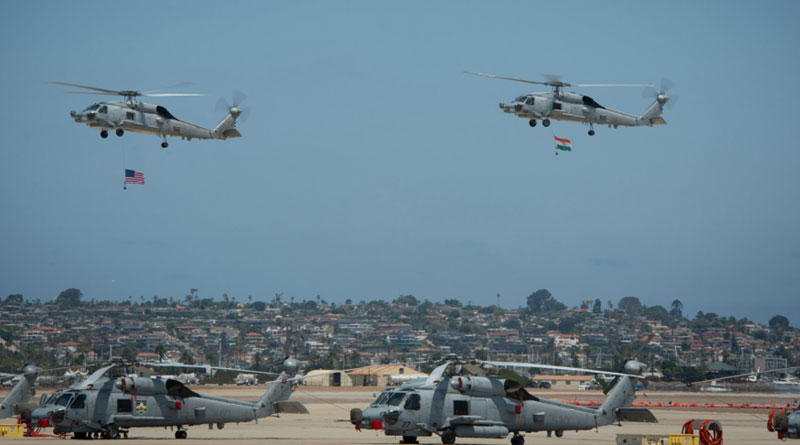 On 16 July, the Indian Navy accepted first two of MH-60R Multi Role Helicopters (MRH) from the US Navy in a ceremony held at NAS North Island, San Diego. The ceremony marked the formal transfer of these helicopters from US Navy to Indian Navy, which were accepted by Indian Ambassador to USA, Taranjit Singh Sandhu. The ceremony also witnessed exchange of helicopter documents between Commander Naval Air Forces, USN, Vice Adm. Kenneth Whitesell and DCNS, IN, Vice Adm. Ravneet Singh.

MH-60R helicopters manufactured by Lockheed Martin Corporation, USA is an all-weather helicopter designed to support multiple missions with state-of-the-art avionics/ sensors. Indian Navy is procuring 24 of these helicopters under Foreign Military Sales from the US Government. The helicopters would also be modified with several India-unique equipment and weapons. In order to exploit these potent helicopters, the first batch of Indian crew are presently undergoing training in the USA. The induction of MRH is aimed at enhancing Indian Navy’s three-dimensional capabilities.

Vice President and Chief Executive, Lockheed Martin India, William L. Blair said, “MH-60R is the most advanced maritime multi-mission helicopter in operation- deployed globally, and its mission performance by far, second to none. We appreciate the tremendous confidence placed in Team Seahawk by the Indian Navy through their selection of the Romeo. We stand committed to making this program a tremendous success in partnership with the United States Navy and the Indian Navy.”