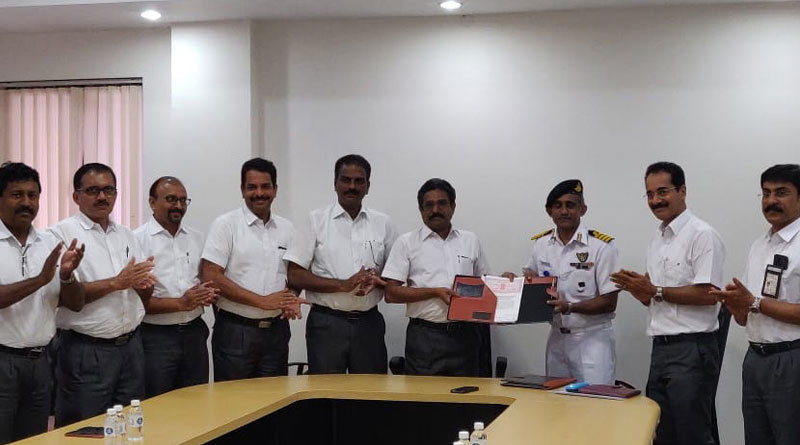 A Memorandum of Understanding(MoU) between Naval Air Enclave (NAE), Kochi and Cochin International Airport Limited(CIAL) was signed on 8 August 2019 in a formal function held at CIAL. Officer-in-Charge, NAE Captain Satish Kumar S and Airport Director, CIAL, ACK Nair signed the document on behalf of both organisations.

The memorandum was signed in connection with commencement of naval air operations from the NAE, a naval aviation facility comprising an independent dispersal, aircraft hangar, administrative building and taxy track, located on the northwest side of CIAL. Military aircraft would use the CIAL runway for take off and landing and the NAE taxy track for proceeding to and from the dispersal/hangar.


The MoU lays down standard operating procedures and their adherence by CIAL and the Indian Navy, for ensuring safe, secure and uninterrupted military air operations. Senior management functionaries of CIAL including executive director, AM Shabeer, chief financial officer, Sunil Chacko and head of operations, Dinesh Kumar C were present on the occasion.

Naval Air Enclave is capable of supporting operations of the highly capable P8I Long Range Maritime Reconnaissance aircraft, which was extensively used to coordinate Search and Rescue Operations off the coast of Kerala and the Lakshadweep Islands in December 2017, following Cyclone Ockhi. The optimal exploitation of the NAE would significantly enhance the maritime reconnaissance capability of Southern Naval Command, as also the Indian Navy.