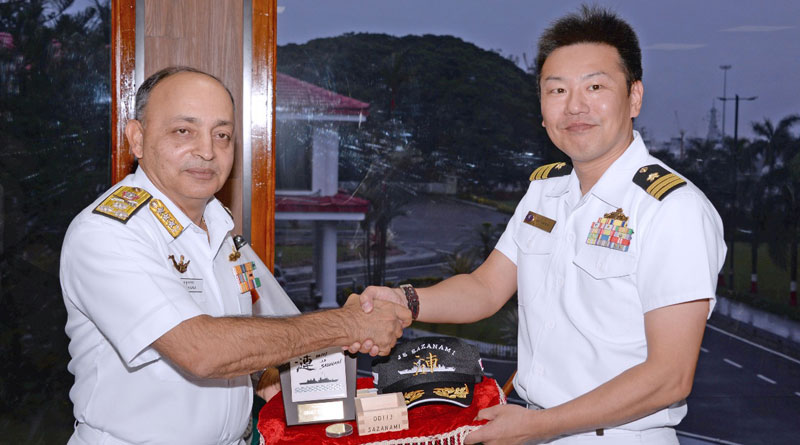 Commanded by Commander Shoji Ishkawa, a missile destroyer of the Japanese Maritime Self Defence Force (JMSDF) JS Sazanami is on a two day goodwill visit to Kochi from August 13. The Commanding Officer accompanied by Coast Guard Superintendent Koichiro Maeda, Commanding Officer, of the Somalia Dispatch Team of the Japanese Coast Guard, and Capt Taiko Eda, Resident Defence Attaché of Japan at New Delhi called on Flag Officer Commanding-in-Chief, Southern Naval Command Vice Admiral Anil Kumar Chawla on the day of arrival, and interacted over professional subjects of common interests to both navies.


During the stay at Kochi, various activities such as visit of IN personnel onboard JS Sazanami and professional interaction between the two navies were conducted. The visiting crew were also given a conducted tour of the Anti-Submarine Warfare School and the Naval Offshore Patrol Vessel, INS Sunayna.

JS Sazanami with about 25 officers, 156 sailors and eight Japanese Coast Guard personnel (3 officers + 5 sailors) on board for the current deployment is planned to depart for Bahrain on August 14.