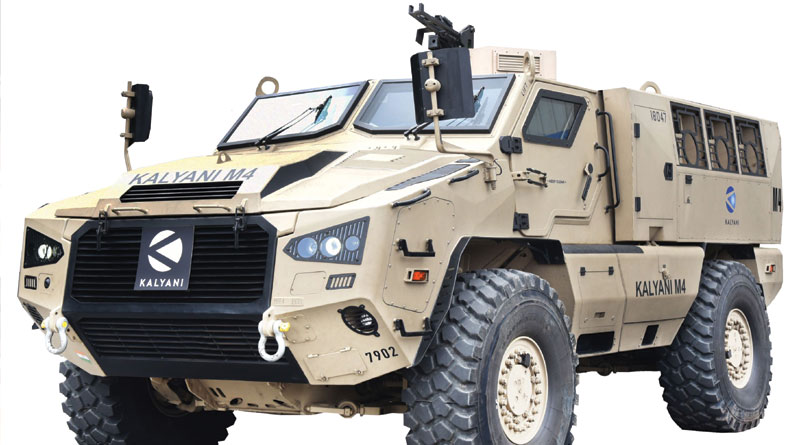 Under Emergency Procurement, the Indian Army has placed an order for M4 armoured vehicles. These vehi­cles were tested in Ladakh during the standoff with China. The Kalyani M4 vehicle can go up to the speeds of 140 km/hour with six crew member includ­ing the driver.

Paramount Group and Bharat Forge Limited had announced a cooperation that will see them join the technolo­gies, capabilities and expertise of both groups in order to manufacture Ar­moured Vehicles in India.

The order is worth Rs 177.95 crores from the Indian Ministry of Defence for supply of Kalyani M4 vehicles. An agreement to this effect was signed by both companies during the Interna­tional Defence Expo (IDEX 2021) held in Abu Dhabi.

The Kalyani M4 is a multi-role plat­form, designed to meet the specific re­quirements of armed forces for quick mobility in rough terrain and in areas affected by mine and IED threats. It of­fers best in-class levels of ballistic and blast protection – up to 50kg TNT side blast or IED/roadside bombs due to its innovative design, built on a flat-floor monocoque hull.

It is intended that the ‘Kalyani M4’ will see service with the Indian Armed Forces in the very near future. The Kalyani M4 successfully completed a series of extreme vehicle trials in some of the toughest environments in India.

Deputy Managing Director, Bharat Forge Ltd, Amit Kalyani, said, “We are very pleased to partner with Par­amount Group. This collaboration brings together the manufacturing and technology excellence of two leading companies, which have match­ing synergies and complementary ca­pabilities. The Kalyani M4 is a fantastic new generation vehicle, and we want to position it as the ‘future of protec­tion’ in all markets world-wide.”


Chairman of Paramount Group, Ivor Ichikowitz stated, “All of our technol­ogies have been developed with por­table production in mind. We believe this model of world-beating innova­tive technology is fundamental to en­hancing any country’s contemporary defence, and technology capabilities. The Kalyani M4 is based on one of our flagship armoured vehicles designed specifically for in-country production in India with our partners the Kalyani Group. We are proud that it will be made in India.”

With ‘atmanirbhar Bharat’ becom­ing the theme song for Aero India 2021, it was only natural that the issue came up in all discussions at the show. In the morning packed with meetings with representatives of its potential customers (Indian armed forces) and one with Rosoboronexport for a naval gun, president and CEO, Bharat Forge Defence and Aerospace, Rajinder Bha­tia squeezed in a few minutes to talk about the importance of self-reliance and Bharat Forge’s role in realisation of this vision.

“It is true that procurement pol­icy has evolved in the last two years. There is more clarity and focus, but the acquisition cycle needs to be short­ened,” he told FORCE in an exclusive interaction. “Hence, while the policy directive is in place, the implementa­tion remains tardy. Basically, we need a change in attitude with regards to framing of qualitative requirements, trials and evaluation process. With the advance in technology, it is no longer necessary to base evaluation purely on physical trials. Physical trials should only be one part of evaluation. Oth­er part should be through simulation. And the user must also have confi­dence in manufacturers’ certification.”

According to Bhatia, the long acqui­sition process not only leads to cost escalation, but also forces the services to induct systems which are nearing obsolescence.

On Bharat Forge’s programmes, he said that the company has interests in all the three domains of land, air and sea. Of these, land remains its strong point, given Bharat Forge’s success with artillery systems. However, this year, it is focussing on protected vehi­cles called Kalyani M4. An armoured personnel carrier, Kalyani M4 has the capacity to withstand 50kg blast on its sides and 14kg in the undercarriage. Last year the vehicle completed suc­cessful trials in Ladakh and is on order by the Indian Army.

Bharat Forge intends to pitch the ve­hicle to the central armed police forc­es (CAPF) as well. The outreach to the CAPFs will also include a sniper rifle and a dual technology mine detection system which combines ground pene­trating radar with magnetic sensors.

Also present at the show is its aero­space portfolio led by small gas turbine aero engines, which are ideal for ‘small unmanned aerial vehicles,’ said Bhatia. The company is also quite optimistic about its joint venture with Rafael Ad­vanced Defence Systems, under which it is looking forward to building some part of the Derby MkIII missile in India. Though currently aimed at the Indian armed forc­es, eventually Bhatia is hopeful of being able to export the missile from India to ‘friendly foreign countries.’