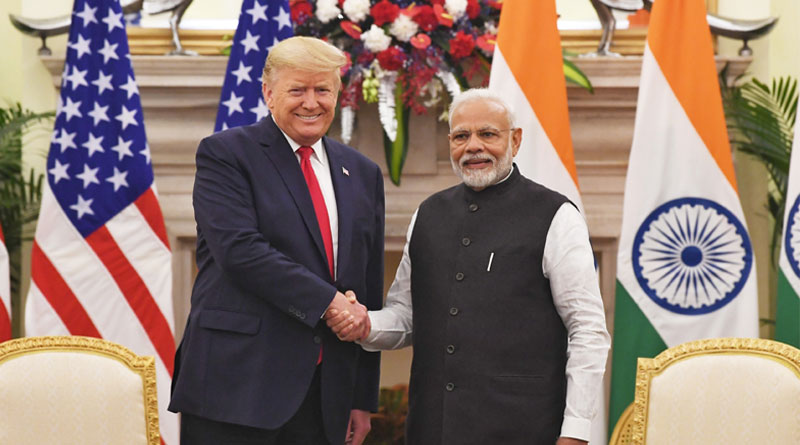 As India and the United States on 25 February 2020 signed three Memorandums of Understanding (MoU) on mental health, safety of medical products and letter of cooperation on LNG infrastructure, Prime Minister Narendra Modi said that America has become an important source of oil and gas for India and the total energy trade between the two countries in the last four years is USD 20 billion.

The two countries also expanded defence cooperation worth over USD three billion which the US President Donald Trump said “will enhance our joint defence capabilities.”

“Earlier today we expanded our defence cooperation with agreements for India to purchase more than USD 3 billion of advanced American military equipment, including Apache and MH-60 Romeo Helicopters. These will enhance our joint defence capabilities,” Trump said during a joint press conference with Prime Minister Modi following US-India delegation-level talks.

Just ahead of Trump’s two-day state visit to India, the Cabinet Committee on Security (CCS) had approved the acquisition of these choppers. According to Modi, the strengthening of defence ties between India and the US is an important aspect of the partnership between the two countries.

The two countries are also increasing cooperation on homeland security and combatting international terrorism. “PM Modi and I affirmed our two countries’ commitment to protecting our citizens from radical Islamic terrorism. In this effort the US is also working productively with Pakistan to confront terrorists who operate on its soil,” said the US President.

This is the fifth meeting between the two leaders in the last eight months. Earlier in the day, Trump inspected the guard of honour and was given a ceremonial reception. He also paid tributes at Rajghat.