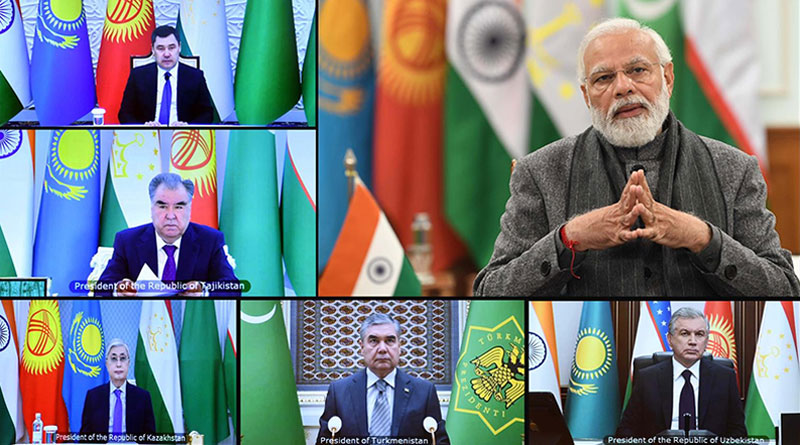 On 27 January, Prime Minister Narendra Modi hosted a virtual meeting with five Central Asian nations, in a bid to stay relevant in Afghanistan. With 3 billion USD in investments in Afghanistan, India is concerned about how Taliban rule could impact security in the region.

The Prime Minister had visited all the five Central Asian countries in 2015. Their Presidents were supposed to visit India as chief guests for Republic Day this year, but the visit was stalled due to Covid19 due to which the Republic Day parade was downsized. Announcing that the summit would be held via video-conference, the MEA called the India-Central Asia leaders’ meeting a ‘reflection of India’s growing engagement with Central Asian countries’.

The conference participants were Presidents of five countries—Kazakhstan’s Kassym-Jomart Tokayev, Uzbekistan’s Shavkat Mirziyoyev, Tajikistan’s Emomali Rahmon, Turkmenistan’s Gurbanguly Berdimuhamedow and Kyrgyz Republic’s Sadyr Japarov. Addressing them, the PM acknowledged the completion of 30 ‘fruitful years’ together and stated, “Our cooperation has achieved many successes over the past three decades… Stronger cooperation between India and Central Asia is necessary for regional security and stability.” Further, Afghanistan under the Taliban raised major ‘security concerns,’ for India and Central Asian countries.

The PM set three goals for the summit, the first being ‘mutual cooperation between India and central Asia’, a region central to India’s vision of an integrated and stable neighbourhood, and which is necessary for regional security and prosperity. Defining the second goal, he said, “Today’s meeting is to give an effective structure to our cooperation, which will pave the way for the establishment of a platform for regular interaction among all stakeholders.” Third, he said that it was crucial to prepare an ‘ambitious roadmap for cooperation between India and Central Asian countries which will enable the nations to adopt an integrated approach for regional connectivity and cooperation.’

It was decided in the summit that the countries, together will institute a Joint Working Group (JWG) of officials on Afghanistan and Chabahar Port. It was also decided that leaders of India and Central Asian countries would hold a summit-level meeting every two years and the next summit was expected in 2024. Joint counter-terrorism exercises will be held between India and interested Central Asian countries. In case of Afghanistan the JWG will ensure the provision of aid to the war-torn country to tackle the humanitarian crisis along with the issue of international recognition of the Taliban.

The MEA in a statement later said, ‘trade and connectivity, development cooperation, [and] defence and security,’ were discussed. The statement said they reiterated their ‘strong support for a peaceful, secure and stable Afghanistan with a truly representative and inclusive government.’

The meeting came two days after Chinese President Xi Jinping hosted the leaders to commemorate three decades of diplomatic relations. Amid a US-led diplomatic boycott of the 2022 Winter Olympics, the five leaders are expected to travel for the opening ceremony. The China-CAR meet announcement came after India announced its meeting with them. He also announced USD 70 billion trade target.

The Chabahar port is India’s answer to Pakistan’s Gwadar port. China’s CAR trade figures have exceeded USD 41 billion, apart from billions of dollars invested in the Belt and Road Initiative. In comparison, India has spent just USD 2 billion, that too mostly on Kazakhstan’s energy exports to India.