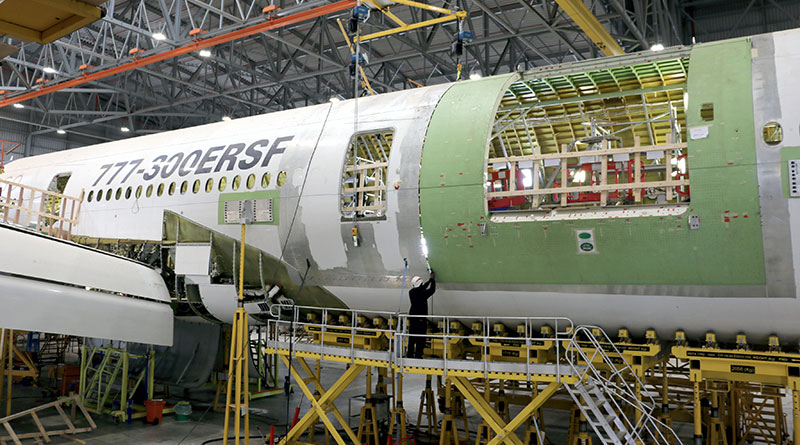 Israel Aerospace Industries (IAI) has signed an agreement to carry out passenger-to-freighter (P2F) conversions for Cargojet Canada’s Cargo Airline. The agreement was signed due to the growing global demand for cargo aircraft and includes the conversion of four B777-300ER aircraft and additional options in the future.

Cargojet operates its network with a fleet of thirty-one (31) aircraft and is a long-term IAI customer for aircraft conversions. Currently, IAI is converting the first B777-300ER aircraft for AerCap Cargo, who are also the co-investor on the programme, in a process that is expected to finish in 2022. This is the first conversion of this model in the world.

IAI President and CEO, Boaz Levy said, “We have been experiencing a rise in demand for converted cargo aircraft. The rise in e-commerce, coupled with the COVID-19 pandemic, has resulted in cargo aircraft becoming a central player in the world of aviation. IAI has decades-long experience in aircraft cargo conversions and combines advanced technologies with its expert production capabilities in aviation to provide the best solution on the market. Cargojet’s selection of IAI to carry out the B777-300ER aircraft conversions is a testament to the trust and customer satisfaction in IAI’s conversion process and in the final product, and we thank Cargojet for the trust they have placed in us.”

IAI is home to Israel’s most advanced systems for land, sea, air, and space. As the home of aviation in Israel, the company unites all activity in the field—maintenance (MRO), business jets, converting passenger aircraft to cargo configuration, hangars and aviation arrays, aircraft upgrading and more.