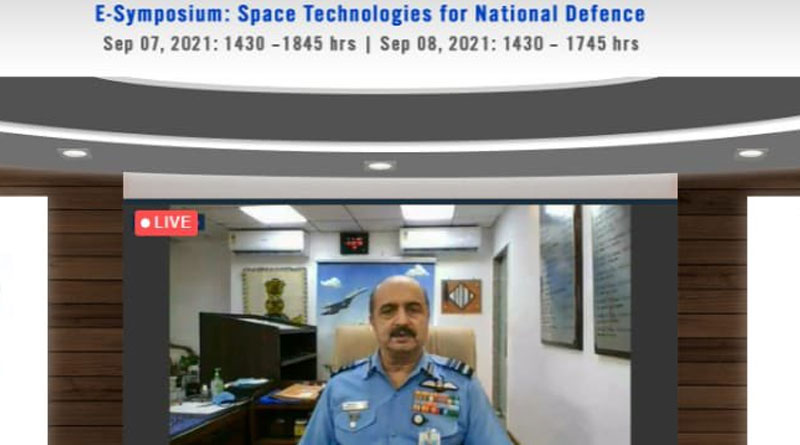 Vice Chief of the Air Staff, Indian Air Force, Air Marshal Vivek Ram Chaudhari, on 7 September said that space might not be the last frontier, but it has become a playground for the world’s best scientists, engineers, and entrepreneurs to continue evolving and breaking new grounds.

Addressing the e-Symposium on ‘Space Technologies for National Defence’, organized by FICCI, in association with Society for Aerospace, Maritime and Defence Studies (SAMDeS), Air Marshal Chaudhari said that in the absence of an independent military space programme the military has been dependent on the civilian space programme of ISRO in the past. “The Air Force is aiming to expand its footprint in space exploration in partnership with ISRO. The Kargil war served as a trigger for having additional satellites towards enhancing our operations. In recent times, increased focus on military space application has been one of the accelerating key factors,” he added.

He said that there is a need to push the envelope towards indigenous launch-on-demand capabilities. “The ability to use aircraft as launch platforms may well be the future. Space tech capabilities have become crucial component for our military operations. Our strategy is to fully integrate air and space capabilities to have a common operating picture in the aerospace medium. We also need to acknowledge that there is a lot of scope for capability development in the realm of military satellite applications.”

Air Marshal Chaudhari added that presently we do not have indigenous capability to observe, track and identify non-cooperative objects in outer space. “This not only restricts our defensive outer space capabilities but also limits our anti-satellite capabilities in the future. Therefore, space situational awareness is the need of the hour. We should be able to know the hostile manoeuvres by advisories’ space objects. The existing capabilities of ISRO and DRDO could be made to be integrated into the air surveillance feature.”

He reiterated that space as an extended battle space is a new reality, and that we need to adapt to this new environment rapidly.

Founder and Chairperson, SAMDeS Former CNS, Indian Navy & Chairman, National Maritime Foundation, Admiral RK Dhowan (Retd) said that India had made significant strides due to the efforts of ISRO. “During the course of this symposium it will be our endeavour to examine various initiatives as well as carry out deliberations on a vast spectrum of issues, including the exploration of technology for launch on demand, communications,” he said.

Chair, FICCI Space Committee, Chairman and Managing Director, ADTL, India, Col HS Shankar (Retd) said that the industry experience in space technology is diversified and distributed. “In the next four years, the private sector has been assigned the task of making five PSLV launches. It is a giant leap of activities, and the industry is looking forward to it,” he said.

Col Shankar mentioned that the new Space policy, which has recently been brought out and is currently being debated on, is due to be finalised soon. “This area of development in space is the fundamental requirement of our own country’s national interests and to expand our foothold into various countries,” he said.

Thomas Hattrick Chair, Professor of Information Systems in Electrical and Computer Engineering (ECE), Stevens Institute of Technology, New Jersey, USA, Dr Rajarathnam Chandramouli said that Spectrum will be a point of contest, and that India must engage with international agencies in this regard.

Head of Airbus Defence & Space for India and South Asia, India, Venkat Katkuri said that the Govt of India should play the role of an anchor investor for all space orders. He said that India has the potential to realise the US$ 1 Trillion export target.

Vice-President and Country Director for India, Thales, Ashish Saraf stated that there is opportunity for Indian industry for joint development and manufacture of Geospatial intelligence satellites.