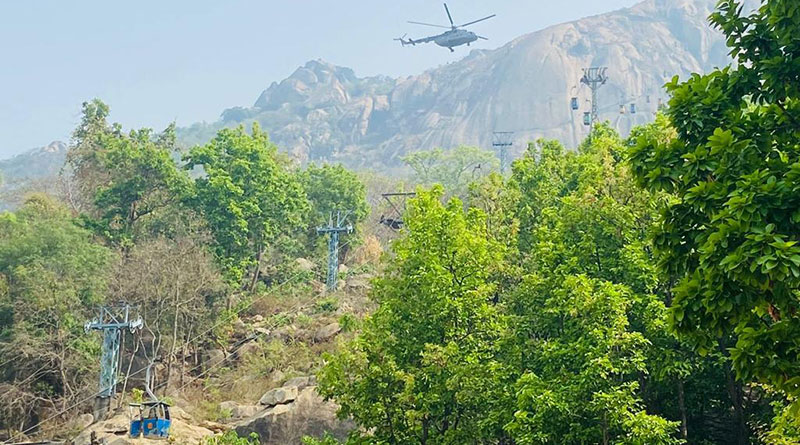 The Indian Air Force (IAF), in close coordination with the NDRF, local administration and the Army, completed the rescue of 35 stranded persons from the Trikut Hills Ropeway Service, in the Deoghar district of Jharkhand. IAF utilised two Mi-17V5, one Mi-17, one Advanced Light Helicopter (ALH) and one Cheetah to fly more than 26 hours towards this effort. Having inducted in the early hours on 11 April 2022, IAF carried out an initial recce for preparations towards an operation which presented unique challenges.

The contingent included five Garud commandos of the IAF, who had the task of climbing onto the stranded trolleys of the cable cart, while being attached to the helicopter’s winch cable, accessing it from outside, strapping up each survivor individually and getting them winched up and into the helicopter hovering overhead. Smaller children were carried up to the helicopter by the Garuds themselves. The helicopter crew was faced with challenges where they had to maintain a steady hover, with practically no visual reference, in conditions of strong winds in the hilly terrain. The crew went from one trolley to the next to carry out their task, which was as risky for the crew as it was for the survivors of the mishap.

A press statement from the IAF stated, “The operation, spread over two days also saw two unfortunate incidents wherein, despite best efforts, the survivors could not be rescued safely due to the inherently difficult nature of the rescue operation. The IAF deeply regrets the loss of lives of these two individuals and expresses its deepest condolences to their families. The IAF reaffirms its commitment to providing support, succour and relief to our citizens always and every time.”