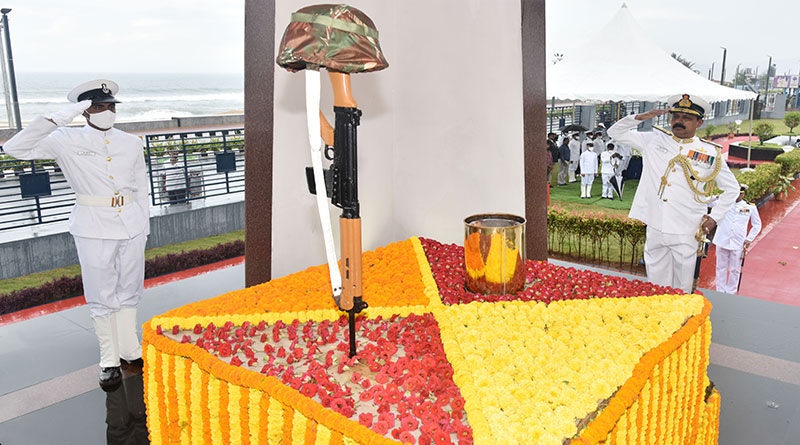 On the occasion of the 23rd Kargil Vijay Diwas, a solemn wreath laying ceremony with a tri-service guard of honour was conducted at Shaheed Smarak at Colaba, Mumbai to commemorate the victory of the Indian Armed Forces and to pay tribute to the supreme sacrifice of our bravehearts. During the ceremony, wreaths were laid by GOC Maharashtra Gujarat & Goa Area, Lt Gen HS Kahlon, Chief of Staff Western Naval Command, Vice Adm K Swaminathan, veterans and other senior officers from all the three services and the Coast Guard.
Kargil Vijay Diwas is commemorated on 26 July every year as a saga of gallantry and valour of a battle fought in the most inhospitable terrain in the world in the area of Kargil-Drass Sector of Ladakh. The Kargil War – Operation Vijay was fought at an altitude of approximately 16,000 feet.

It was on this day that the Indian armed forces braved the most difficult terrain, battled extreme weather conditions and fought on the steep slopes of icy peaks with to defeat the enemy.

On the occasion of the 23rd Anniversary of Kargil Vijay Diwas, Eastern Naval Command paid homage to the brave soldiers who laid down their lives fighting for the country.  Director General Naval Projects, Visakhapatnam, Vice Admiral Sreekumar Nair, President Navy Foundation, Vice Adm VK Namballa (Retd), Visakhapatnam District Collector, A Mallikarjuna and Zilla Sainik Welfare Officer, G Satyananadam paid homage to the Veers of Kargil War in a solemn Wreath Laying Ceremony at ‘Victory at Sea’ War Memorial Visakhapatnam on July 26.  A Guard of Honour was paraded on the occasion.  The Guard performed the ‘Salami Shastra’ and Vice Adm. Sreekumar Nair placed the floral wreath. While the bugler sounded the ‘Last Post’, a two-minute silence was observed.

The nation remembers the supreme sacrifices of the brave heroes of the Kargil War when India successfully recaptured the covertly occupied outposts inside the Line of Control on this day twenty-three years ago.

The ‘Victory at Sea’ War Memorial at RK Beach Road Visakhapatnam is a tribute to mark the supreme sacrifice of our brave soldiers who made the supreme sacrifice during the 1971 Indo-Pak war. Homage is paid to our fallen heroes on important occasions like Republic Day, Independence Day, Vijay Diwas and Navy Day by placing a floral wreath at the memorial.

Wreath Laid on the Occasion of Kargil Vijay Diwas

To commemorate the sacrifice made by Kargil heroes, a wreath laying ceremony was carried out by, Gp Cdr, NCC Gp, Gp Capt Brijesh Kumar Chauhan on the occasion of Kargil Vijay Diwas on July 26 at the Shaurya Smarak at Vayusena Nagar, Nagpur.