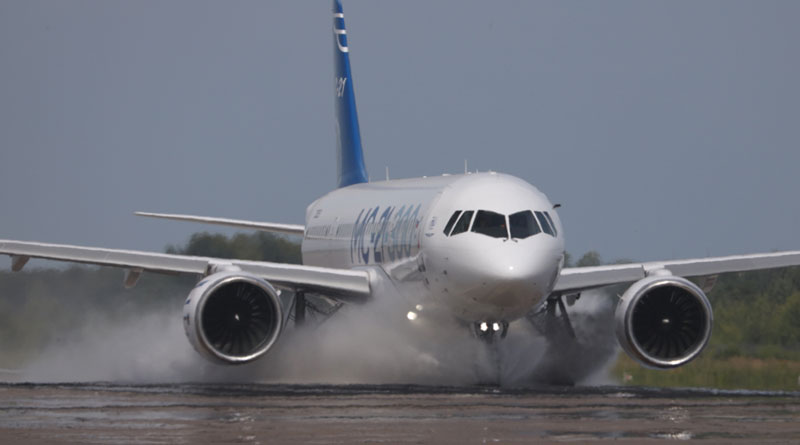 In addition, the tests found that the MC-21-300 aircraft is steadily moving and retains control on the runway covered with water

Irkut Corporation summarized the preliminary results of MC-21-300 aircraft ground testing, “which confirmed the possibility of operating the aircraft in presence of water on runway,” read a statement.

The tests were carried out on the “Ulyanovsk-Vostochny” airfield, where the “pool” of more than 70 m long and more than 20 m wide was mounted. Parameters of the “pool” provided a normalized water depth in accordance with Russian and international requirements, which are established for these types of tests.


In the process of testing the possibility of safe movement on a wet runway in a wide range of speeds without any failure of marching and auxiliary power plants, as well as other systems and equipment of the aircraft were confirmed.

In addition, the tests found that the MC-21-300 aircraft is steadily moving and retains control on the runway covered with water.

The course of testing was recorded by a complex of onboard measurements of the aircraft and a system of video cameras installed on the ground and on the aircraft.

The tests were conducted as part of the MC-21-300 aircraft certification program with the participation of representatives of authorized certification centers.

MC-21-300 is a new generation passenger aircraft with a capacity from 163 to 211 passengers, targeting the most mass segment of the air transportation market. The advanced design solutions implemented during the aircraft development are designed to ensure high flight, technical and economic performance of the aircraft, as well as a new level of comfort for passengers.

Irkut Corporation conducts flight, ground and bench tests of the MC-21-300 aircraft in order to obtain the type certificate according to Russian and European airworthiness standards. A prototype aircraft is under construction, which will undergo flight tests with Russian PD-14 engines.