BSF’s case for having its own artillery

It is strange to find the BSF in possession of artillery; it is stranger that only a few senior BSF officers know that they have an artillery wing. However, the strangest thing is that not many officers in the BSF Academy at Tekanpur are aware of what goes on at the Artillery Training School in their midst. The School, established in 1990, is headed by deputy commandant S.S. Chandel. Equivalent of a major in the army, Chandel has recently done the ‘advanced gunnery’ course at the Army’s School of Artillery in Devlali. This course merely qualifies an army officer to become a confident Observation Post Officer in the artillery. But, at Tekanpur, Chandel heads the BSF’s Artillery Training School. Chandel’s next senior within the artillery is an officer of DIG (brigadier) rank who sits at the BSF Headquarters in New Delhi. While this is no slur on the capabilities of Chandel or the artillery with the BSF, it raises many questions. Probably the most important is why does the BSF need the artillery in the first place? And if it does, why is it so small? The BSF’s artillery wing comprises seven regiments; two with 105mm Indian Field Guns (IFG), one with 75/24mm mountain guns, and four with the World War II vintage 25 pounder guns. Like the army’s artillery, a BSF artillery regiment is sub-divided into three batteries with six guns each. The BSF has a total of 140 guns as compared with the army’s artillery with over 5,000 guns divided into 250 field regiments. 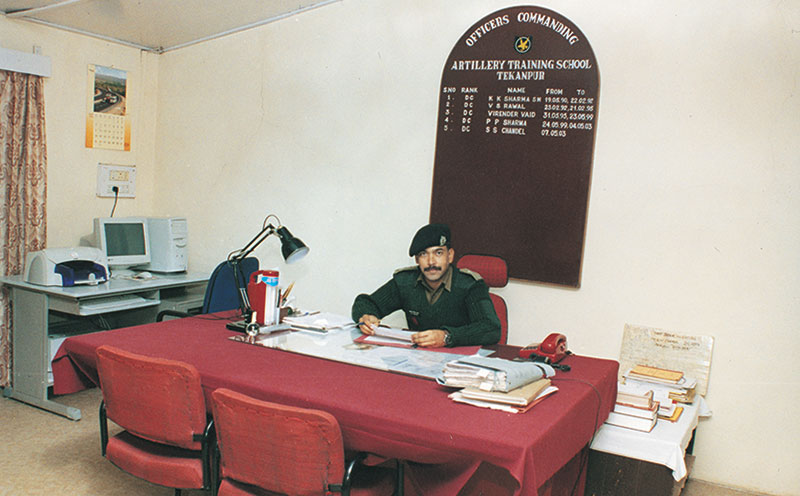 “The artillery is needed against sudden enemy attack,” explains the DG, BSF Ajai Raj Sharma. Chandel also offers the same explanation initially, but subsequently modifies it, as he concedes that in the light of Operations Vijay (the 1999 Kargil war) and Parakram (the 10-month-long military stand-off with Pakistan), a likelihood of a ‘sudden attack’ (by Pakistan) is simply impossible. India is investing heavily in long range surveillance and intelligence gathering means to ensure that there are no operational surprises. The BSF has been justifying having an artillery arm on grounds of its responsibilities in the Rajasthan sector. It has been argued, with merit, that the BSF Border Out Posts (BOPs) in Rajasthan are nearly six kms apart. In the event of a ‘surprise attack’ by Pakistan in this sector, the BSF artillery, which is close to the border, would provide the first line of defence until the army gets mobilised and its artillery takes charge of the situation.

However, the present BSF operational deployment of its artillery proves that its task has changed completely. It no longer provides the first line of defence in Rajasthan or any other sector. Instead, its role is to supplement the army’s artillery. For example, the only BSF artillery deployment is five batteries of 105mm IFG in Jammu and Kashmir; three in Bandipore and two in Baramullah. Until 2003, one battery of 75/24mm guns was being used in direct firing role in Keran sector in the Valley. With a range of 10,500 metres, 75/24mm guns had to be pulled up by mules to the Line of Control and were employed in direct firing of up to 1,200metres. This had a sobering effect on the Pakistanis whose many bunkers were destroyed with the BSF mountain guns. Unfortunately, the lack of spares and limited ammunition of the vintage 75/24guns forced the BSF to withdraw the mountain guns which now lie in their training school in Tekanpur. The four regiments of 25 pounder guns are being used for training purposes in Tekanpur, and await replacement with 105mm IFG.

In keeping with our wanderlust, in January 2004, FORCE team visited the BSF Academy at Tekanpur to get a first-hand account of India’s leading border guarding force. The visit was the curtain raiser to the larger article on India’s paramilitary forces. Since then, FORCE has paid as much attention to internal security, as it did to external defence. Read on

The BSF 105mm IFGs, with a range of 17km are being used as the fourth (Sera) battery with the concerned army’s artillery regiment. The latter is sub-divided into three batteries called Papa, Quebec and Romeo. This operational set-up has both advantages and disadvantages. On the plus side, the BSF supplements the fire power of the regular artillery. Instead of 18 guns with the regular unit, the commanding officer now has a total of 24 guns. Importantly, it helps retain the element of surprise. The commanding officer of the artillery unit fires its Sera battery alone during peace time to convey the impression to the enemy that only BSF guns are available in the area. The regular artillery is kept silent as long as possible. On the minus side, the regular artillery feels that the BSF gunners need much more training both at the gun end and the Observation Post (OP) end. Given that the artillery is a highly specialised arm, it is necessary that the training skills of BSF gunners at the gun end and the quality of observation at the OP should be at par with regular artillery officers. This requires an intensive interaction at all levels between the BSF and regular gunners. At present, this is not possible. As Chandel explains, “The BSF artillery is small. It does not have a regular cadre which means that both officers and men are on deputation in the artillery.” It is a waste of time and talent to have BSF officers and inspectors do specialised courses like Long Gunnery Staff Course at the School of Artillery and revert to general duties after a while.


As far as modernisation goes, Chandel says, “We hope to replace all 25 pounder guns with 105mm IFGs by 2005.” Unfortunately, the indigenous 105 IFGs are not good either and have been phased out of the regular artillery. Being made in Kanpur, the 105mm IFG had initially failed to meet the General Staff Qualitative Requirement (GSQR) of the army. The army wanted the IFG to weigh not more than 2.7 ton; the Defence Research and Development Organisation could not bring the weight down from 3.5 tons. As the weight affected operational mobility, the DRDO attempted to replace the IFGs with the 105mm Light Field Guns (LFG) weighing three tons which has a platform instead of split trails in the IFG. About 40 regiments of the army’s artillery are equipped with the LFG which have added problems of metallurgy; after firing certain rounds at intense rates of fires, certain LFG platforms developed cracks making the gun ‘unfit for service.’ The army has since decided to replace the LFG with better 155mm calibre guns. Therefore, just like the 25 pounders were given to the BSF after they were phased out of the regular artillery in late Seventies, the IFGs are now replacing the 25 pounders with the BSF. It is thus obvious that at present there is little case for the BSF to expand its artillery wing. Considering that the indigenous production lines of both the IFG and LFG have been closed down, it will not be long before the new BSF guns face shortages of spares, critical assemblies and ammunition. The answer to the problem lies with the BSF. If it wishes to expand its artillery wing it will need to have a separate cadre as distinct from the general duties cadre which can then have a meaningful professional interaction with the regular artillery. Until then, the BSF will have to be satisfied with its newly acquired IFGs.