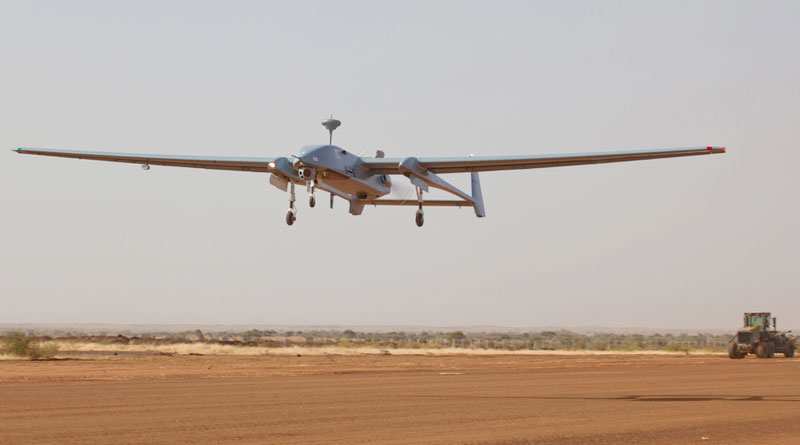 When adding the Heron 1’s operations for the German Armed Forces in both Afghanistan and Mali, the Air Force’s UAV system has chalked up more than 57,500 successful operational flight hours

Airbus Defence and Space and the Federal Office of Bundeswehr Equipment, Information Technology and In-Service Support (BAAINBw) have signed a renewed service contract agreement for Heron 1 unmanned aerial systems (UAS) in operation in Afghanistan and Mali.

The press note by Airbus stated, “In Afghanistan, Heron 1 services have been extended in March 2020, for the period June 2020/May 2021. It had logged up more than 46,000 flight hours in over 4,100 operational flights. Also in March this year, the German Air Force passed the milestone of 10 years of Heron 1 operations in Afghanistan, with a first operational flight dating back to 17 March 2010. Comparably in Mali, Heron 1 services has also been extended for the period August 2020/July 2021 (with an option for August 2021/July 2022). It had logged more than 11,500 flight hours in over 1200 operational flights. The system’s first flight in Mali dates back to 1 November 2016 after the first service contract was signed in July 2016.”

Both places of deployment are being managed using a joint operator model between the Bundeswehr and industry. The Heron 1’s provision, maintenance and repair of the system is the responsibility of Airbus Defence and Space in Bremen.


This operator model impressively demonstrated its performance capabilities during operations in Afghanistan and Mali, as emphasised by proven high system readiness of 99%. The deployments of the Heron system in Afghanistan and Mali also help develop expertise within the Bundeswehr with a view to future MALE RPAS systems.

German reconnaissance tasks focus on the country’s crisis regions in order to provide the best possible protection for the country’s population as well as for the German troops and the contingents of other mission nations stationed in the country.

Manufactured by the Israeli company IAI (Israel Aerospace Industries), Heron 1 is an unarmed medium altitude long endurance (MALE) UAS which can stay airborne above the respective theatre of operations.

The Heron 1 has a wingspan of 16.6 meters and a maximum mission endurance of over 24 hours. The system’s military tasks include detecting booby traps from the air, accompanying convoys and patrols, assisting forces in combat situations, reconnoitering and surveilling routes, establishing movement profiles and long-term monitoring, supporting situation assessments, and protecting property and military camps. It is also used to support humanitarian missions.

These Heron 1 systems, currently deployed by the German Armed Forces in Afghanistan and Mali, are to be replaced by the more powerful IAI Heron TP, following an operator agreement signed in Berlin in July 2018 between Airbus Defence and Space and the Federal Office of Bundeswehr Equipment, Information Technology and In-Service Support (BAAINBw). The replacement of Heron 1 by Heron TP will have a two-year set-up phase, followed by an operational phase lasting a further seven years, thereby bridging the gap until a sovereign European MALE UAS will be developed.