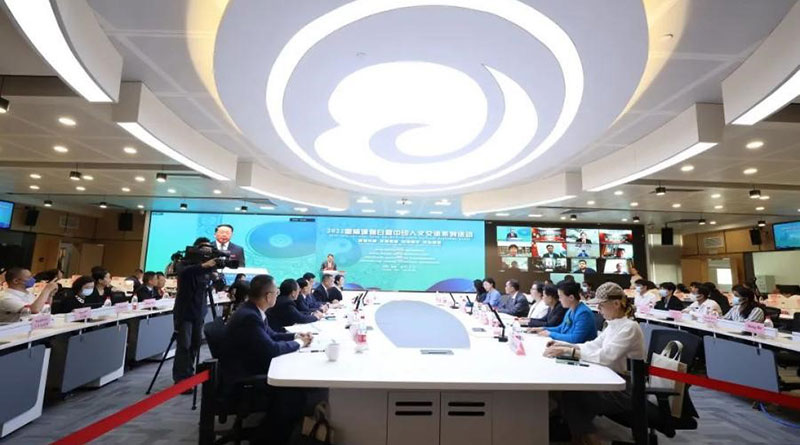 The 2022 International Yoga Day & China-India Cultural Exchange Event was held on June 21 in Kunming, southwestern China’s Yunnan Province. Themed on “Enhance Mutual Learning between Civilizations through Yoga, Work Together to Strengthen People-to-People Bond,” the event was attended by more than 100 Chinese and foreign guests both online and offline.

At the opening ceremony, Chen Luyan, dean of India-China Yoga College of Yunnan Minzu University, said that as a trailblazer of developing yoga programs in higher education, the college seeks to build a new bridge for cultural exchanges between China and India. Chen hopes that more and more people would discover yoga, practice it and enjoy it.

Chinese Consul General to Kolkata Zha Liyou said that Yoga, as an influential world cultural heritage, carries more than a form of body exercise and a way to purify one’s mind. Zha noted that Chinese and Indian civilizations have prospered and learned from each other, which makes great contribution to the world civilizations and the building of a community with a shared future for mankind.

Dr. H. R. Nagendra, chairman of the Experts Committee of International Day of Yoga and vice chancellor of VYASA Yoga University, said that the objective of yoga for humanity is to build a world order of love, harmony, peace, energy, vitality and health. He hopes that Yunnan Minzu University would spread the message of yoga for humanity that helps build an ideal social order.

Jiang Yonggang, president of the Center for Europe and Asia of China International Communications Group (CICG), said that the center aims to promote cultural exchange between China and South Asia. Jiang expressed the hope for this event to become a crucial platform for strengthening mutual learning between China and India, and make greater contribution to the prosperity of the Asian civilizations.

At the main forum and three parallel forums of this event, over 50 scholars and experts joined discussion on topics including “Yoga and Tai Chi: Dialogue beyond Body,” “Cultural Exchange and Mutual Learning between Chinese Civilization and Indian Civilization,” and “Yoga and Health Promotion in China.”

In a parallel forum, R.N. Bhaskar, consulting editor with Free Press Journal, cited three examples in his speech to illustrate different approaches China and India have adopted to address problems related to culture, education, and poverty. He emphasized that when talking about equality, poverty reduction is the best metric to gauge its progress and that education results in higher culture and better growth for a country. He called for proper handling of these issues because everything depends on our ability to live harmoniously alongside each other.

The event was organized by the China-India Yoga College of Yunnan Minzu University, China-India Dialogue with the CICG Center for Europe and Asia (China Pictorial Publications), and Yunnan International Communication Center for South and Southeast Asia.