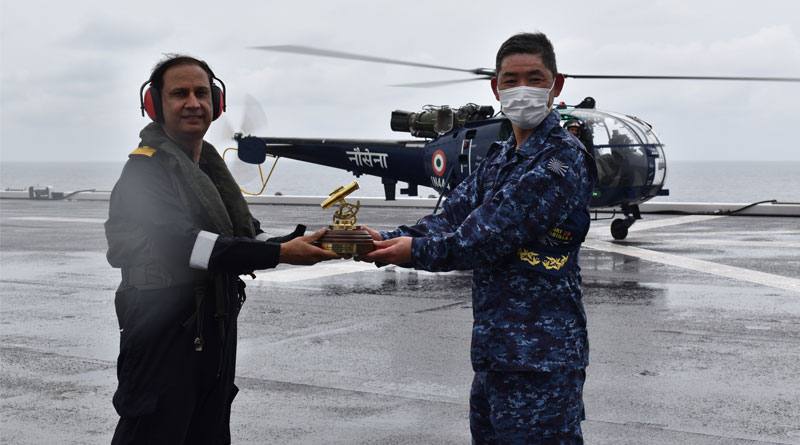 The fifth edition of the bilateral maritime exercise JIMEX, between Japan and India, was conducted in the Arabian Sea from 06 – 08 October 2021. The exercise saw the ships and aircraft of Japan Maritime Self Defence Force (JMSDF) and Indian Navy (IN) engaging in a high tempo of operations focused on air, surface, and sub-surface dimensions of maritime operations as well as the air domain.

Setting the operational tempo from the start, the units exercised War at Sea scenario with P8I (IN) providing maritime reconnaissance support to both navies. The units practiced Replenishment at Sea approaches and undertook fuel rig connect-up between Kaga and Kochi. The exercise also involved complex Over the Horizon Targeting exercises and surface gun shoots on an expendable target. An advanced coordinated anti-submarine exercise involving an underwater target deployed by JMSDF saw surface units and IN’s P8I aircraft exercising with seamless coordination. Flag Officers of the two forces also met on the Flight Decks of Kochi and Kaga during flying operations, in keeping with the true spirit of military friendship.

The Air Domain operations included advanced anti-aircraft firing exercises on Expendable Aerial Target launched from the deck of INS Kochi and ship controlled Beyond Visual Range (BVR) combat drills by IN’s MiG 29K fighters. The exercise involved a high tempo of flying operations with MiG 29K fighters coming in for multiple simulated air strike on surface units, shepherded by the IN’s Maritime Patrol Aircraft, Dornier. The inclement weather could do little to hold back IN and JMSDF helicopters from undertaking cross-deck landings, showcasing a high level of interoperability.

A press statement from the Indian Navy stated, “The precision, coordination and the high level of interoperability reflected not only the high standards of professionalism and preparedness the two navies maintain to counter threats at sea, but also the high level of trust and understanding that they have built over the years. The complex maritime exercises undertaken will enable the two navies to further strengthen their already wide-ranging strategic partnership and, when required, to jointly safeguard their maritime interests and ensure peace, security, and stability in the region.”