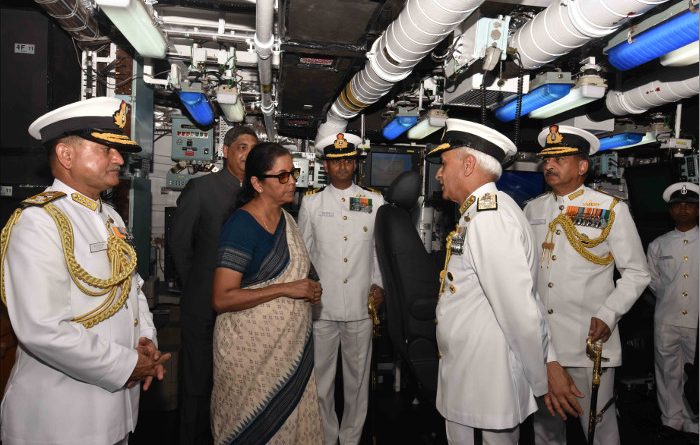 On arrival at the Naval Jetty, defence minister Nirmala Sitharaman was received by CNS Admiral Sunil Lanba. The minister was presented with a Guard of Honour and was introduced to the dignitaries’ present prior commencement of commissioning ceremony.


Welcoming the gathering, Admiral Sunil Lanba stated that this commissioning marks yet another milestone in our journey of indigenous warship building. The Indian Navy is deeply committed to the principle of indigenisation and the government’s thrust on ‘Make in India’. Commissioning of four ships in the last year, all built in Indian shipyards, is a testimony of our resolve. Our commitment to indigenisation also assumes special significance as we have steadily broadened our indigenisation efforts beyond ship building. We have achieved considerable success with indigenous sonars such as Abhay and HUMSA-NG as well as weapons such as Varunastra and BrahMos. These achievements are a result of the Indian Navy’s proactive and integrated approach to achieve self-reliance, said the Admiral.

During her address post commissioning of INS Kiltan, Sitharaman congratulated the Indian Navy, M/s. GRSE, other Indian PSUs and a host of small and medium scale industries, which have contributed towards building this fine ship. She emphasised that the navy’s relentless pursuit of self-reliance through indigenisation is highly appreciable and this has helped the Indian Navy to seamlessly transform from a Buyer’s to a Builder’s Navy. She highlighted that the addition of INS Kiltan to the naval fleet is a reaffirmation of this transformation. She later unveiled the Commissioning Plaque and dedicated the ship to the nation.