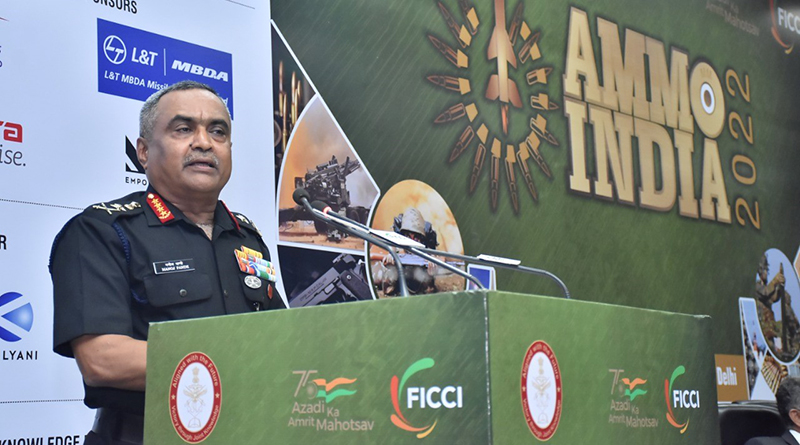 Speaking at AMMO INDIA 2022, Chief of the Army Staff, General Manoj Pande said that self-sufficiency in critical defence requirement is a strategic imperative now more than ever. “Our external dependence on armaments and ammunitions have been a matter of concern and the reversing of this trend which we are witnessing is quite encouraging,” he added.

Addressing the special session on the second day of the second conference on Military Ammunition ‘AMMO INDIA 2022’, the Chief of Army Staff highlighted the potential for domestic and foreign players in the Indian defence production. He said that Atmanirbharta did not mean isolating from the world, but self-sustaining and self-generating to promote efficiency, quality and resilience. “It has been unequivocally stated that collaboration with foreign OEMs is intrinsic to Atmanirbhar Bharat and we have moved from a relationship of buyer-seller to a co-development and co-production with our foreign partners,” he said.

General Pande stated that the ongoing reforms in the defence sector offer opportunity for the foreign OEMs to partner with the Indian companies and work towards shared objectives. There was a huge potential for exports which could also contribute to the vision of the Prime Minister’s vision of a 5 trillion USD economy. “Therefore, the vision of achieving Atmanirbharta in ammunition requires a synergised approach from all stakeholders. Together with need to turn the initiative into another success story and a win-win situation for all,” he said.

General Pande stated that the contemporary security environment and changing character of war required the armed forces to handle a wide spectrum of challenges both in conventional and sub-conventional domains. “Our interests are best served by being Atmanirbhar, especially in the defence production. Self-reliance is among the key factors on which the military capability of any nation rest. A holistic, all-encompassing, well calibrated, multi-pronged and futuristic approach in defence production is fundamental to ensure safeguarding our national interest,” he added.

Regarding R&D, he said that along with technological progression it is equally fundamental to self-reliance. “Atmanirbharta in defence production does mean limited to production but it should also encompass evolving homegrown capabilities and technologies. For a holistic and self-reliance strategy, it is imperative that ammunition life cycle management capabilities are concurrently established,” he said. A significant investment is also needed in establishing R&D infrastructure, testing and evaluation capabilities to meet our ammunition needs.

He further stated that a pragmatic and actionable indigenous defence production strategy is needed to ensure a secure and sustained supply of ammunitions and armaments as per our national security needs. There is also a need to share the experiences and technical knowledge of DRDO, OFBs and other PSU units with the industry to build new capabilities. We need to have a more collaborative and cooperative framework in which all stakeholders to work together to reduce import dependence and provide required impetus to the domestic capabilities, added the Chief of the Army Staff.

Co-Chair, FICCI Defence & Aerospace Committee & Head- Aerospace & Defence Strategic Business Mahindra Defence Systems Ltd, N Raveeswaran highlighted that we need to create Indian OEMs which can design and create platform for ammunition system. “With the government’s push for Make in India in recent years, the defence industry understands that the development of both platforms and ammunitions through Indian industry is the way forward,” he added.

Co-Chair, FICCI Defence & Aerospace Committee & CEO- Jupiter Capital Pvt Ltd, Co-Chair and Non-Executive Director- AXISCADES Engineering Technologies Ltd, Sudhakar Gande reiterated that the need for a good infrastructure for testing and R&D. He also urged for allowing the Ordnance Factory Boards (OFB) infrastructure to be made available to the private sector through well-defined terms and conditions. 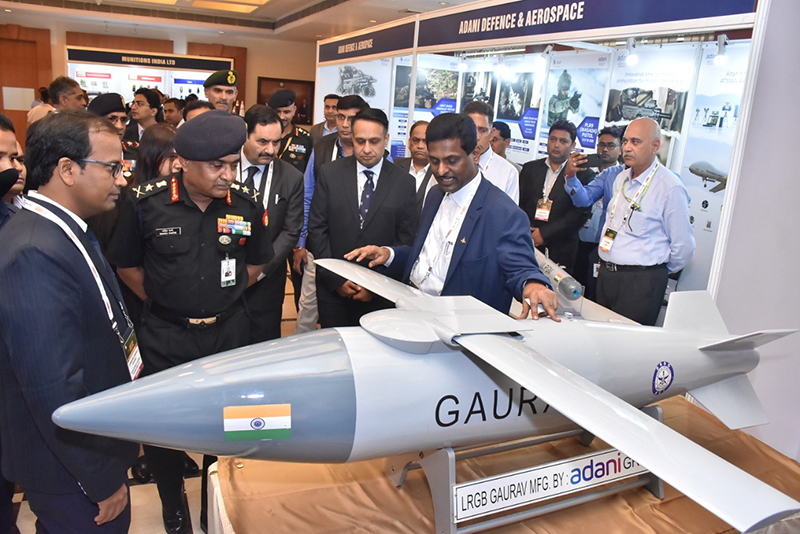