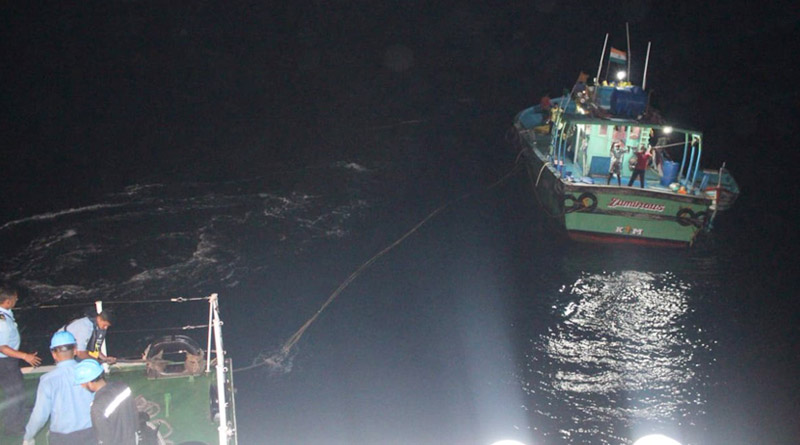 The Indian Coast Guard (ICG) has started a large-scale series of pre-emptive and proactive measures to prevent loss of fishermen lives at sea in the wake of alerts on cyclone in Bay of Bengal since November 09, 2018. The lessons ICG learnt from cyclones Ockhi, Luban and Titliwere are being put into practice by the Coast Guard.

The Indian Coast Guard asked fisheries authorities in the states of Tamil Nadu and Andhra Pradesh to track and account for all fishing boats. The ICG conducted series of community interaction programmes at Kanyakumari, Mandapam, Rameswaram, Cuddalore, Chennai, Nellore, Nizampatnam, Uppada and Vishakhapatnam to sensitise fishermen and coastal populace to take safety measures in the wake of the impending cyclone.


One large ICG ship with Helicopter embarked was sent from Vishakhapatnam with relief items such as potable drinking water, essential medicines, packaged food and life-saving material to southern Tamil Nadu coast. This was done in anticipation of the need for relief material and essential items after the impact of the cyclone in Southern Tamil Nadu areas of Mandapam and Karaikal.

Three other ICG ships were also sent from Chennai for Mandapam on November 15, 2018 for augmenting search and rescue and post cyclone relief operations. Further, merchant vessels transiting at deep seas were requested through International Safety Net by Maritime Rescue and Coordination Centre (Chennai) to alert fishermen at deep seas for early return and shelter at nearest ports.

Similar warnings have also been issued for the western coast, as the likelihood of formation of a low pressure exists in the Arabian Sea from November 17, 2018 onwards.