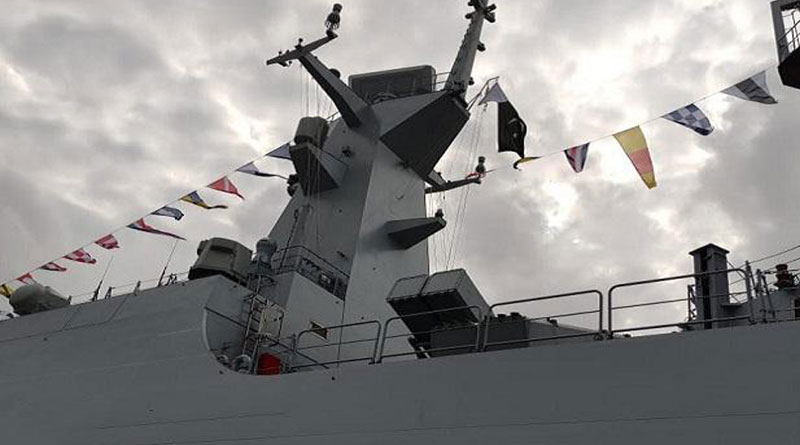 In a boost to its defence partnership with China, Pakistan has received China’s largest and most advanced warship to beef up the navy of its all-weather ally in the Arabian Sea and the Indian Ocean, where it has increased its own naval presence in recent years.

In a statement, China State Shipbuilding Corporation Limited (CSSC) said that the ship, designed and built by CSSC, the frigate was delivered to the Pakistan Navy in a commissioning ceremony in Shanghai. The Type 054A/P frigate was named the PNS Tughril. The frigate is the largest and most advanced warship China has ever exported, CSSC said.

According to China’s Global Times, Pakistani Ambassador to China Moin ul Haque said that the commissioning of the PNS Tughril ensures balance of power in the Indian Ocean.

In the context of the overall security paradigm of the region, Tughril-class frigates will strengthen Pakistan Navy’s capabilities to respond to maritime challenges to ensure seaward defence, maintain peace, stability and balance of power in the Indian Ocean region, he added.

The PNS Tughril is the first hull of four Type 054 frigates being constructed for the Pakistan Navy and the vessel is a technologically advanced and highly capable platform with enormous surface-to-surface, surface-to-air and underwater firepower, besides extensive surveillance potentials, the daily quoted a Pakistan Navy’s statement.

Being equipped with state-of-the-art combat management and an electronic warfare system along with modern self-defence capabilities, the Type 054A/P frigate can simultaneously execute a number of naval warfare missions in a highly intense multi-threat environment, it said.

China which shares all-weather strategic ties with Pakistan has emerged as the biggest weapons supplier for the Pakistani military. Besides the advanced naval ships, China also partners with the Pakistan Air Force to build JF-17 Thunder fighter aircraft.

Besides building its first military base in Djibouti in the Horn of Africa in the Indian Ocean, China has acquired Pakistan’s Gwadar port in the Arabian Sea which connects with China’s Xinjiang province by land in the USD 60 billion China Pakistan Economic Corridor (CPEC).

China is also developing Sri Lanka’s Hambantota port after it acquired it on 99 years’ lease.

The modernisation of the Pakistan Navy coupled with the acquisition of the naval bases was expected to shore up the Chinese Navy’s presence in the Indian Ocean and the Arabian Sea.

Besides acquiring four modern naval frigates from China, Pakistan will also be getting eight Chinese submarines as part of the modernisation of Pakistan Navy, its Chief Admiral M Amjad Khan Niazi told the daily in February this year.

The Pakistan Navy has contracted the construction of four Type 054A/P frigates from China since 2017.

Compared to previous Chinese frigates, the new ship is said to have better air defence capability, as it is equipped with an improved radar system and a larger number of missiles with a longer range.