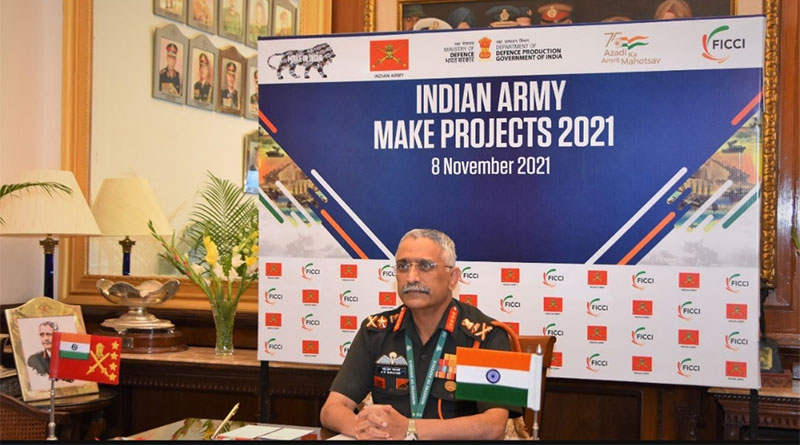 Speaking at the webinar on ‘Indian Army Make Projects’ organised by the Indian Army in conjunction with FICCI, Chief of the Army Staff, General M.M Naravane on 8 November said that the Indian Army is fully committed to the indigenisation efforts of our industry.

“The industry is already aware of the large and diverse inventory of the Indian Army. The technology, at least in many systems, is simpler as compared to the other services and our sheer numbers make sound business sense,” he said.

Gen. Naravane further said that India has an expanding industrial base and most of our core requirements of defence equipment can be realised in house. “We have the potential to redefine India into a global hub for manufacturers of defence equipment. Indian Army is undergoing rapid modernisation and is increasingly looking at indigenous solutions for its operational needs. Developing indigenous and local capabilities will reduce dependence on foreign technologies,” he said.

The Chief of Army Staff further said that the Indian Army is proud to lead the efforts of to promote MAKE projects and with numerous enabling provisions by the government, MAKE 2 is undoubtedly going to remain the preferred mode of acquisition for us. As on date Indian Army is participating in 36 make projects, including 15 projects that are suo moto proposals received from the industry.

Speaking at the event, Lt Gen. Shantanu Dayal said that the Army’s commitment towards ‘Make in India’ with design and development projects with the industry being undoubtedly the preferred mode of acquisition. Be it development of niche technologies or indigenization of key equipment, the Make process afforded multiple advantages to both the Armed Forces as well as the industry.

Further, Lt Gen. Dayal said that the ‘Make’ category equipment will be used in extremely challenging operations; hence quality and cost are the two most important aspect for the Indian Army.

He said that in collaboration with the industry, the Indian Army aims to ensure great success of the Make category equipment in the country.

Additional Secretary, Department of Defence Production, Ministry of Defence, Sanjay Jaju said that the department of defence production lays huge emphasis on building a robust defence ecosystem in which healthy mix of public and private sector is envisaged.

A booklet on ‘Army Make Projects 2021’ was released at the event that lists out the current progress of ongoing projects, new projects being launched along with allied information on the Make Process.

Chair, FICCI Defence and Aerospace Committee and Group President (Defence, Aero, Agri and Steel); Member of the Group Executive Board, Mahindra Group, S.P Shukla said that the provision of Make category of capital acquisition in Defence Acquisition Procedure (DAP) is a vital pillar for realising the vision behind the ‘Make in India’ initiative of the Government. It enables fostering indigenous capabilities through design & development by both public and private sector in a faster time frame.

Co-Chair, FICCI Defence & Aerospace Committee and EVP, Guns Missiles & Armoured Systems (GMA) BU, L&T Defence, Arun T Ramchandani said that the annual engagement with the Indian Army on the ‘Make Projects’ was an important landmark event. “We are delighted to learn that the Indian Army is progressing with 36 Make Projects,” he added.

The Indian Army unveiled six new ‘Make-II Projects’ during the webinar. The new projects span technologies across unmanned systems, technologies to counter such systems as well as emerging solutions for augmenting air defence capabilities. Details of these projects were shared with the Indian Industry by the nodal officers and all queries of the industry on these new projects were deliberated in an interactive session. The Army will work with the industry to evolve the development dimensions of each project.