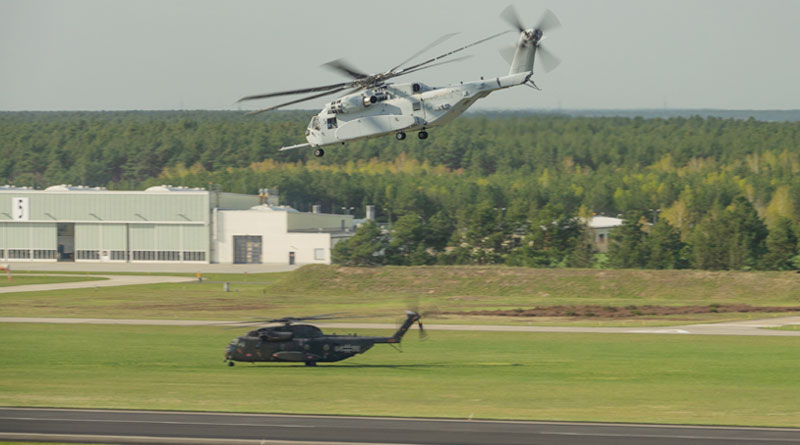 Lasting several hours, the test flight took place at the beginning of April off the east coast of the United States

Lasting several hours, the test flight took place at the beginning of April off the east coast of the United States. Inflight refuelling has also been defined as an essential capability for the Bundeswehr’s new heavy transport helicopter, or STH. In response to the current Bundeswehr request for tenders, Lockheed Martin subsidiary Sikorsky and Rheinmetall have joined forces to offer Germany the top-performing CH-53 K, the most advanced, most intelligent helicopter on the market today, according to the company statement.

In particular, the CH-53K’s advanced fly-by-wire flight control significantly reduces the strain on the crew during inflight refuelling operations. This was confirmed during the recently conducted flight tests. The ability to refuel in mid-air is a requirement for covering long distances without having to make intermediate stops, and substantially expands the CH-53K’s operational flexibility. It means that it can be redeployed to distant areas of operation, for instance, and remain aloft for extended periods. The helicopter can carry more personnel and materiel for longer distances and under more challenging operational conditions than any other aircraft of its kind.


Besides the same tanker aircraft, in future the Bundeswehr inventory will include the C-130J transport plane made by Lockheed Martin. The cargo hold of the C-130J is designed to use the 463L-standard air cargo pallets, which the CH-53K can also transport. Using the same pallets in the fixed wing aircraft and transport helicopter offers immense advantages when it comes to loading and unloading materiel.

This interoperability reinforces in a fundamental way military cooperation between France and Germany: at Évreux in Normandy, the two nations are currently creating a joint fleet of C-130J/KC-130J aircraft.  The use of standardized air freight pallets also enables interoperability with other transport planes in Europe such as the A400M, a decisive advantage during joint operations.

In the meantime, full-scale production of the CH-53K has begun at the Sikorsky plant in Connecticut, as planned. In all, 31 aircraft are currently at different stages of completion. The first USMC CH-53K squadron is expected to be operational by 2023/24.

In Germany the CH-53K is now in the running for the Bundeswehr’s “Schwerer Transporthubschrauber STH” procurement project; the decision as to which heavy transport helicopter to buy is expected to come at the beginning of 2021. The first aircraft could – as required – be delivered starting in 2024, thus enabling a seamless transition from the current CH-53G fleet, coupled with training of personnel and putting the necessary logistics in place necessary for operating in Germany.  By this time, the CH53 helicopters supplied to the USMC will already be fully operational, and Marine flight crews and maintenance technicians will be able to draw on their experience to assist in initial training of Bundeswehr personnel. The transition from the CH-53G now in service with the Bundeswehr to the new STH fleet of heavy transport helicopters is to be complete by 2032.