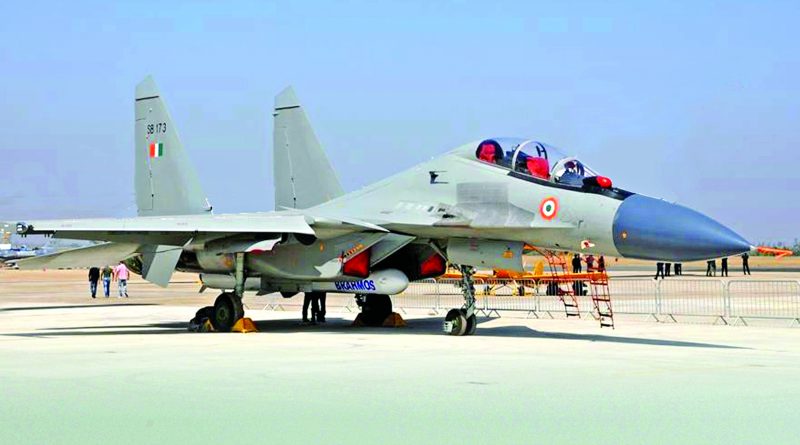 The supersonic BrahMos cruise missile air launch version (BrahMos-A) will be test-firing by the end of this year. This was disclosed by the air force chief, Air Chief Marshal B.S. Dhanoa at the customary media interaction on October 5 to mark the Air Force Day.

With this test being successful, the air launch version would enter the air force completing the trio of the anti-ship version with the navy and the land-attack version with the army. It is important that this test, preparations for which have been made since 2012, be held on time as it would initiate induction of technologies critical for cruise missiles which would be the game-changers for deterrence and war-fighting.

A single BrahMos-A fired from the Su-30MKI aircraft will witness a 300kg warhead going at speed of 2.8 Mach hitting a naval target (an abandoned ship) at 400km range with pin-point accuracy (zero Circular Error Probability, or CEP) with the DRDO radars recording the entire event. It could be argued that what is the big deal if the Su-30MKI flying close to Mach 2 speed with a range of 3000km and payload carrying capacity of 8000kg (eight ton) is used to throw a single BrahMos-A missile onto the sea-target? The big deal would be that with zero accuracy error, BrahMos-A would provide excellent stand-off maritime strike capability and lethality when launched from air close to Andamans and Nicobar Islands (where India has the Andaman and Nicobar Command) to cover the Strait of Malacca, the key choke point that connects the Western Pacific with the Indian Ocean. India thus would have acquired the capability to both seek (through its P-8I aircraft) and kill hostile vessels entering what it considers its backyard where the Indian Navy is the net security provider.

Moreover, this would be just the beginning. The next step would be simultaneous work on three fronts: equipping 40 Su-30MKI with this capability; miniaturisation of BrahMos-A to BrahMos-NG (Next Generation), work on which has begun with Russia and is expected to be accomplished by 2021; and indigenisation of two key technologies – propulsion and seeker – which will have a wider application in the sub-sonic Nirbhay cruise missile which, being built by the DRDO, is at present, not much of a success.

The radar, seeker and propulsion technologies of BrahMos-A come from Russia. It uses a mono-pulse X-band Imaging Synthetic Aperture Radar which is better than the Terrain Contour Matching (TERCOM) radar used in cruise missiles the world over. All cruise missiles flying at sub-sonic (less than sound) speeds are designed to be terrain-hugging since they are required to evade enemy radars by flying low over large distances. Given this, they have TERCOM which continuously maps the terrain and matches it with its own stored data to reach the target. Since BrahMos is the only cruise missile with super-sonic (more than sound) speed, it travels at about 16km above sea-level. It uses this special radar which gets its updates from the GPS/Russian GLONASS and flies across many way-points (where the flight changes its path instead of the traditional trajectory which can be monitored) to evade enemy radars. Because of this peculiarity, and the super-sonic speed, BrahMos is impossible to be intercepted.

The BrahMos seeker – seeker SGH – is made by the Russian company, Granite Joint Stock Company. It has the capability for accurate terminal guidance, where the seeker takes over from the GPS supported radar to hit the target. DRDO is developing an indigenous seeker which involves numerous domestic companies especially Data Pattern and ECIL. Once done, the seeker will be an Indian IPR design which can freely be used in other applications. It is for this reason that the DRDO did not take up the European MBDA company’s offer for transfer of seeker technology as part of the, now abandoned, joint-development and production Maitri short-range surface to air missile programme.

The BrahMos propulsion involves two-stage motor, of which the booster is the first stage and the ramjet engine (much better than turbojet technology) being the other one. In order to reduce the weight of the BrahMos-A by 500kg as compared with the navy and army version of BrahMos, the booster size has been reduced with the ramjet engine remaining the same weight. This has been done since BrahMos-A fired from the Su-30MKI will already be at an altitude that does not require much boost to enter the cruise phase powered by the ramjet engine.

The challenge, however, will be in the miniaturisation of BrahMos-A so that three missiles – BrahMos NG – instead of the present single missile on the Su-30MKI can be loaded. This will require a new ramjet engine, work on which is underway with Russia. In terms of war-fighting, Su-30MKI armed with three BrahMos-NG will enhance the air forces’ mission options.

This is not all. Once India gets its propulsion and especially the seeker, it will be a big boost to the other DRDO programme – the sub-sonic Nirbhay cruise missile. This missile has had four tests out of which three were unsuccessful and the results of the fourth were not disclosed.  The Nirbhay is claimed to have 1,000km range with a turbofan engine. Turbofan engines consume much less fuel than turbojets of equivalent size; hence are more complex system and extremely expensive. Accordingly, turbofan engines are considered suitable for long-range cruise missiles with ranges between 600km to 2,000km. At present, only a few countries have mastered the turbofan propulsion technology. Interestingly, China is amongst them and Pakistan’s Babur cruise missile uses Chinese technology.

In fact, the Nirbhay programme was started to meet the challenge from the sub-sonic Babur missile. A few turbo-fan engines were procured from Russia. However, when the DRDO openly boasted about Nirbhay having capability to carry nuclear warheads, Russia stopped supply of engine. This came as a blessing in disguise as the DRDO was compelled to work on an indigenous engine with Russian help. According to sources, this project is moving satisfactorily and once India develops its own seeker there will be a commonality of seeker between three missiles – BrahMos, Nirbhay and even the Russian 3M14 Club with the Indian Navy.

To place in the global perspective, cruise missiles are the weapon of choice rather than the ballistic missiles because they are less expensive; are easier to design, develop, procure, maintain and operate; have wider applications in conventional warfare including in unmanned aerial vehicles; and have fewer technology restriction, especially so since India is a member of the Missile Technology Control Regime since 2016. Given all this, the test-firing of BrahMos-A should not be delayed since it opens up avenues for India to acquire state-of-art technologies.