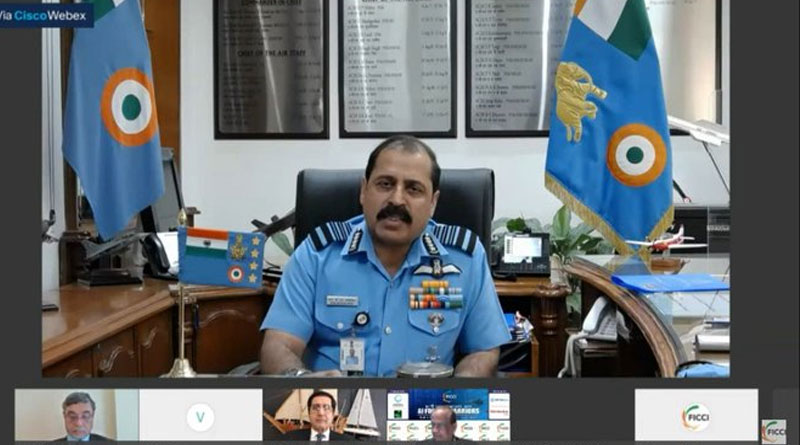 Speaking at the E-Symposium on Artificial Intelligence (AI) for Air Warriors organised organised by FICCI and CENJOWS on 5 April, Chief of Air Staff RKS Bhadauria spoke of the importance of AI in warfare and reflected upon the nature of this technology.

Regarding the IAF’s AI development, he said, “IAF has already embarked on the AI journey and having gone through some very important automation projects in the recent past, we have started testing AI and AI-based applications on some projects which are at different stages.” While speaking about different projects of the IAF that are under works, he said that the force had not yet done any ‘great work’ in the AI domain and that it had only ‘scratched the surface’. The potency of this technology is so high that we probably are already late. Giving a message to the industry, he said that  it was time that we started working proactively in this field.

“Traditionally, air forces have been the lead consumers of all the advanced technologies before they proliferated to other areas, however, in the last few years, we have seen evolution of many new technologies in the non-military domain which eventually got adopted by the fighting forces. AI being one of them has seen exponential growth and applicability in the commercial sector and having realised its great potential now, militaries all over the world are racing to embrace it,” he said.

In the aerospace domain today, the Air Chief Marshal said that AI could bring enormous changes in the way air wars are fought while currently it had not matured to an extent where completely autonomous missions could be executed.

He said, “While AI is being developed in multiple areas in air domain to accrue diverse and asymmetrical air operational benefits, the questions we need to address in the process are- Whether algorithms can be trained to effectively execute mission-planning behaviours in unpredictable battle scenarios; can machines be taught combat strategies and how does it become applicable to the air power and to what extent; could sufficiently generalised representations be built to capture the richness of the planning problem itself across the threat matrix?”

The answers to these questions, he said, will help us firm up our requirement specifications that will essentially be a starting document vis-a-vis the expected outcomes. If we tend to utilise AI heavily in combat aviation, we may need to redefine or even abandon certain traditional principles.

He added that to optimally use AI we had to first decide as to when the systems should be supervised by humans and when not. He said, “This is a decision that should involve technical logic and questioning. Humans are designed to be more effective at problem solving whereas AI thrives in environments with high correlations and underlined patterns. Probably the most important considerations in AI are the ethical ones. Can we ever get to a stage where we clear an AI to take a human life?”

On the impact of AI technologies to be incorporated in training, he said, “Smart technologies like AI have the potential to totally change the way we train and fight future wars. We are living through some interesting times.”

He further added, “It is the right time for all of us, the military operators, the industry, the think-tanks and all the AI specialists for creating next-generation AI enablers for air war.”