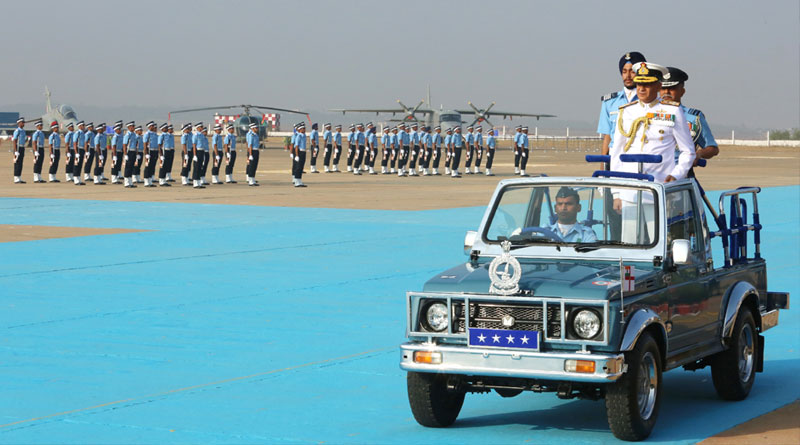 The event marked the passing out of 105 Flight Cadets as Flying Officers of the Indian Air Force including two women fighter pilots.

The combined Graduation Parade of Pilots and Ground Duty Officers was held on December 16 at Air Force Academy (AFA), Dundigal near Hyderabad. The event marked the passing out of 105 Flight Cadets as Flying Officers of the Indian Air Force. These young officers included two women Fighter Pilots out of total 15 women officers.

This occasion also marks the passing out of 200th Pilot’s course of Indian Air Force officers, a long way forward since the beginning of the training of Indian trainees at Royal Air Force College, Cranwell in Oct 1931. Admiral Sunil Lanba, Chief of the Naval Staff, was the Chief Guest of the parade. As the Reviewing Officer of the parade, he conferred the ‘President’s Commission’ to the graduating Flight Cadets who successfully completed their basic and professional training. Also present on the occasion was Air Marshal SRK Nair, Air Officer Commanding-in-Chief (AOC-in-C) Training Command, Indian Air Force.

During the parade 14 officers of Indian Navy and Coast Guard were also awarded their ‘Flying Brevets’. IAF routinely trains members of other services and para-military forces in basic aviation and related courses at Air Force Academy, Dundigal.

The day’s events started with a display by the Skydiving team of Indian Air Force ‘Akash Ganga’, followed by spectacular synchronised movement of ‘Air Warrior Drill Team’ of the Indian Air Force. The parade started with General Salute to the Reviewing officer. The ceremonial review by the ‘Reviewing Officer’ was followed by a march past. The high point of the parade was the commissioning ceremony in which the graduating cadets were awarded ranks by the Chief of the Naval Staff, Air Officer Commanding-in-Chief Training Command and Commandant Air Force Academy. After the commissioning, Admiral Sunil Lanba awarded the most prestigious award of the academy, ‘Chief of Air Staff Sword of Honour’ and President’s Plaque for standing first in overall merit in Pilots’ Course to Flying Officer Karan Pal Singh. He also awarded President’s Plaque to Flying Officer Vishnu Vishal and Flying Officer Mohit Kumar for being first in overall merit in Navigation and Ground Duty branches respectively.


Congratulating the passing-out cadets, the Chief of the Naval Staff said “It is a matter of great honour to review the Combined Graduation Parade of flight cadets and witness these fine men and women joining the Indian Air Force as future Military leaders and Aviators”. He emphasised in his address, the importance of core values of a military leader i.e. integrity, courage, honesty, and selfless service to the nation. He reminded that there can be nothing more satisfying than participating in the defence of one’s nation. He exhorted the young officers to carry forward the espoused legacy and the core values of Indian Air Force namely, ‘Mission, Integrity and Excellence’, in every walk of life. The newly commissioned officers were administered oath by the Commandant of the Academy.

The Graduation Parade culminated with a well synchronized display by the PC-7 MK II (the aircraft currently used in AFA to train greenhorn pilots), Kiran, Hawk aircraft and the Sarang Helicopter team and aerobatics by the full-member Suryakiran Formation Aerobatic team.