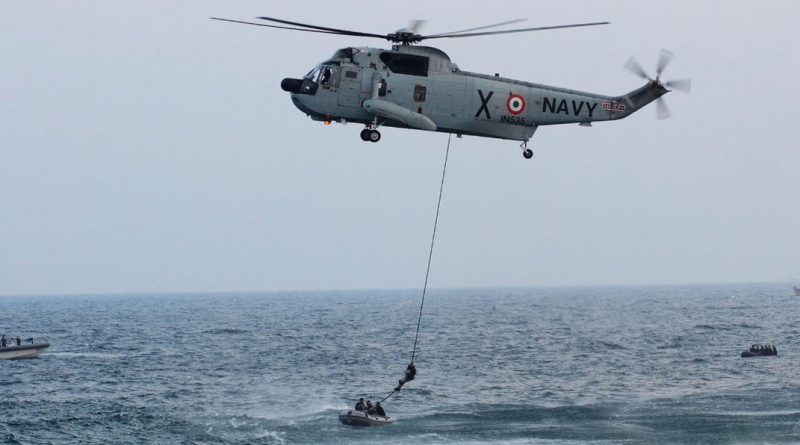 A total of 84 personnel have been rescued over the last two days.

Indian Navy’s search and rescue operations continued for the third day over Southeast Arabian Sea and Lakshadweep and Minicoy islands in the aftermath of Very Severe Cyclonic Storm ‘OCKHI’. The ships deployed by the Southern Naval Command include IN Ships Sagardhwani, Jamuna, Nireekshak, Kabra and Kalpeni off the Kerala coast and Sharda , Shardul towards Lakshadweep islands. Besides this, three aircrafts Dornier, Seaking Helicopter and Advanced Light Helicopter were also deployed throughout the day.

INS Shardul from Kochi is heading towards Minicoy islands with Humanitarian assistance and disaster relief (HADR) ‘bricks’, which includes water, dry provisions, medical equipment, blankets, diving team, generators, salvage equipment, desalination and decontamination kits, diving team and has a Chetak helicopter embarked. The relief material would sustain 2000 persons for over a period of seven days. INS Sharda is heading towards Kavaratti islands with HADR material sufficient to last for more than seven days for 500 people. The ship while proceeding to the islands, saved nine lives from a capsized boat in distress enroute.


Naval ships from Mumbai, INS Chennai, Kolkata and Trikand have also sailed out for Lakshadweep and Minicoy (LAM) islands with HADR material sufficient for approximately 5000 persons and would last for more than seven days. Androth and Kavaratti are reported to be experiencing strong winds of 40-60 knots coupled high swells of 3-4 metres with a sea state of 5-6. All the ships are expected to reach LAM by morning tomorrow.

In addition to the aircraft from Kochi, the P8I aircraft from Arakkonam with greater reach is being used to maintaining a close vigil continuously over the sailing ships and provide inputs if any.