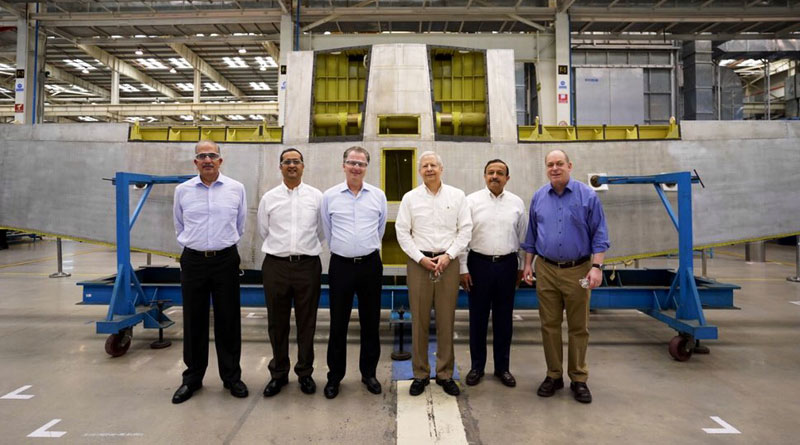 Juster’s visit to the 4,700 square-meter Tata-Lockheed Martin facility marks the 10-year anniversary of the partnership between the two countries

US Ambassador to India Kenneth Juster on 10 March 2020 visited Hyderabad to advance the US-India strategic partnership.  He toured the Tata-Lockheed Martin Aerostructures facility, currently in its 10th year, which stands as a testament to the strong relationship between the defence industries of the United States and India.  The Ambassador also attended the “Topping Out” Ceremony of the New Consulate Compound in Hyderabad.  In addition, he announced completion of a US-funded restoration project at the 17th century Qutb Shahi Tombs through the Ambassadors Fund for Cultural Preservation (AFCP).

Juster said, “I’m pleased to see progress at the new US Consulate Compound in Hyderabad.”  The Ambassador added, “From the success of the US-India defense partnership, as exemplified by a decade of cooperation between Lockheed Martin and Tata, to the restoration of the historic tombs of Taramati and Premamati, US-India ties are clearly thriving in Hyderabad.”

Juster’s visit to the 4,700 square-meter Tata-Lockheed Martin facility marks the 10-year anniversary of this partnership and highlights the importance of the growing defence ties between the United States and India.  The jointly-owned facility in Adibatla manufactures airframe components, including centre-wing boxes and tail sections for the C-130J military transport aircraft.  Tata-Lockheed plans to expand their partnership to produce further aircraft in India, which would advance the capabilities of the Indian Air Force and accelerate US-India cooperation in sensitive high-end technologies.


The Ambassador celebrated the completion of all major structural components at the new US Consulate Compound in Hyderabad during his visit.  The expansive structure has now reached a significant milestone in the Consulate’s construction. The new facility serves as a pillar of the deepening relationship between the United States and this region of India, where Consulate General Hyderabad officially engages communities, companies, and institutions across the States of Telangana, Andhra Pradesh, and Odisha, read a statement from the US embassy. Spread across more than 12 acres, the facility will feature 54 consular interview windows as well as artfully preserved Deccan rock formations.

In February 2019, Juster had announced a USD1,03,000 grant through the Ambassadors Fund for Cultural Preservation, partnering with the Aga Khan Foundation to restore and conserve the centuries-old tombs of Taramati and Premamati within the greater Qutb Shahi Tombs complex.  This is the second grant awarded by the US government for conservation work at the Qutb Shahi Tombs.  An earlier AFCP grant of USD1,01,000, awarded in 2014, contributed to mapping and documenting structures throughout the site and helped transform archaeologists’ understanding of the monument’s earliest architecture.