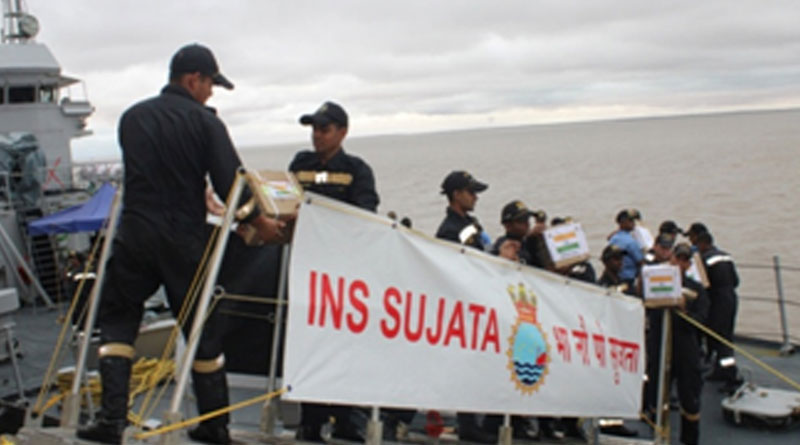 The prompt and proactive response by the Indian Navy (IN) and the impeccable professional conduct of Humanitarian Assistance and Disaster Relief (HADR) operations by units of the First Training Squadron (1TS) namely IN Ships Sujata and Shardul and ICGS Sarathi at Beira, Mozambique in the aftermath of extremely severe Tropical Revolving Storm ‘IDAI’ has highlighted India’s and the Indian Navy’s commitment to regional maritime security. The alacrity with which the Indian Navy responded to the developing situation, under Op Sahayata, has reinforced its reputation as the ‘First Responder’ and ‘Net Maritime Security Provider’ in the IOR.

The ships of First Training Squadron (1 TS) were operating in the Southern Indian Ocean and were enroute from Port Louis, Mauritius to Durban, South Africa. On receipt of the request from the Government of Mozambique, the three ships were diverted to Port Beira, Mozambique to provide aid and succour to the local population post devastation caused by cyclone IDAI which struck the coast of Mozambique on 15 March 2019. Acting swiftly to the developing situation, INS Sujata and ICGS Sarathi arrived at Port Beira on 18 March 2019, while INS Shardul arrived on 19 March 2019 to provide support to the local administration, thus becoming the only maritime force to arrive onsite. The three ships were in Mozambique till 30 March 2019.


IN ships commenced liaison work in coordination with local authorities, which included disembarkation of HADR stores, food, medicines and clothing to the Mozambique defence authorities. The ships’ salvage and restoration parties worked tirelessly and cleared roads, cleaned schools/community shelters, distributed aid, provided cooked food/water, repaired pumps and restored electricity. The communications provided by the Indian Navy ships on site were the only connection with the outside world from Port Beira during initial days and the ships’ boats and Chetak helicopter, the only means to ferry reporters of local/international media. Extensive civil assistance and infrastructure repair provided by the Indian Navy were instrumental in early and effective relief from the damage inflicted by tropical storm ‘IDAI’.

The Indian Navy ships deployed boats, landing craft and rubberised Gemini craft with divers in the face of extremely challenging conditions aggravated by cyclonic weather, high tidal range/currents, navigational hazards from debris/uprooted trees to render assistance for evacuation of stranded personnel. Over a period of ten days, nine tonnes of relief material was transferred to Buzi Island and 192 personnel were evacuated by the ship’s boats operating in uncertain depths in flooded areas and waters infested with reptiles.

The Indian Navy helicopter Chetak, braving the adverse weather conditions and unfamiliar terrain, operated from Beira airport. The helicopter undertook 18 sorties clocking nearly 25 hours of flying operations for evacuation of personnel in coordination with local authorities and the UN Mission. The mission and profiles of air sorties included rescue of pregnant women/children, dropping of essential supplies, aerial survey by Mozambique leadership and ferry of Red Cross/UN officials and earned admiration for the perseverance/skills of the crew and versatility of the aircraft.

INS Shardul also ferried 135 tonnes of relief material from Maputo to Port Beira based on a request by Mozambique Government. Nine containers of HADR items including medical supplies were handed over to the representatives of the government of Mozambique. Additionally, in keeping with the hon’ble Prime Minister’s vision of Security and Growth for All in the Region (SAGAR) and desire to strengthen the Indian Ocean Rim Association (IORA) and Indian Ocean Naval Symposium (IONS) constructs, INS Magar augmented the relief efforts and arrived at Port Beira on 13 April 2019. The ship handed over 250 tonnes of rice and 500 kgs of medicines including epidemic medicines to HE Higino Francisco de Marrule, National Minister of Agriculture, government of Mozambique.

The Indian Navy ships undertook commendable rescue and relief operations providing succour to the beleaguered and marooned population, overcoming damaged infrastructure, language barriers and lack of communication/ transport. The IN personnel showcased professionalism, humane approach, willingness to walk the extra mile, operational risk management and innovative spirit in face of odds strengthening bridges of friendship across the Indian Ocean. This unique and well-coordinated initiative of the IN in conjunction with various stakeholder ministries of the Government of India has been much appreciated by not only the Mozambique nationals and Indian diaspora in Africa but the international community as well. 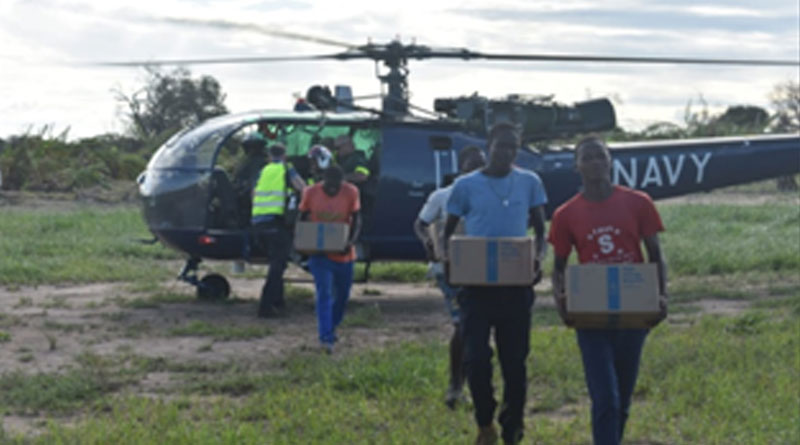