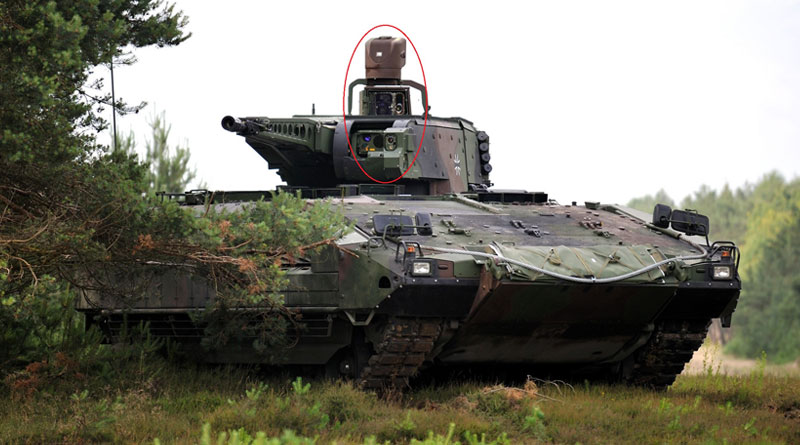 HENSOLDT is under contract to deliver in total 342 MUSS equipment sets by 2020 to primes Krauss-Maffei Wegmann and Rheinmetall. Apart from that, HENSOLDT’s Optronics subsidiary provides the ‘Puma’ programme with weapons optronics systems, periscopes and driver sighting systems. MUSS was the Active Protection System (APS) selected for the UK DSTL MEDUSA Programme which was delivered by QinetiQ in the UK and Australia. The MUSS was successfully integrated onto the British Army Challenger 2 MBT by BAEs and the capability extensively trialed by serving British Army personnel during the Op User Trials.

“Electronic protection systems like MUSS are opening up enhanced possibilities for protecting armoured vehicles from attacks, as is already the case for aircraft or helicopters,” said Thomas Müller, CEO HENSOLDT. “Compared to conventional solutions, we are able to increase the protection level considerably without adding weight or risking collateral damage around the vehicle”.

MUSS drastically reduces the likelihood of a hit by antitank guided missiles or laser-guided ammunition and is the only operational soft-kill active protection system for ground vehicles worldwide. It achieves a level of protection which is not possible for the same total weight with passive armour while avoiding collateral damage.


Each MUSS system consists of four warning sensors, a central unit, an infrared jammer head, jammer electronics and a smoke grenade launcher. The warning sensors detect approaching missiles and laser beams aimed at the vehicle. The central unit activates an infrared jammer, which interferes with missiles’ guidance systems, and/or initiates the use of pyrotechnic countermeasures.

An active protection system like MUSS defeats threats before they strike a vehicle, by sensing them and providing a ‘soft’ response based on jamming or obscuration of the guidance mechanism with no risk of collateral damages. Moreover, MUSS is a discrete solution, which has no significant influence on the vehicle radiation as it features only passive sensors and an infrared Jammer with short activation time, not detectable either in visible or in thermal image spectrum.

Expert for decades in self-protection sensors and systems, HENSOLDT delivers major components for the electronic self-defence systems of platforms in the air, sea and land domain.