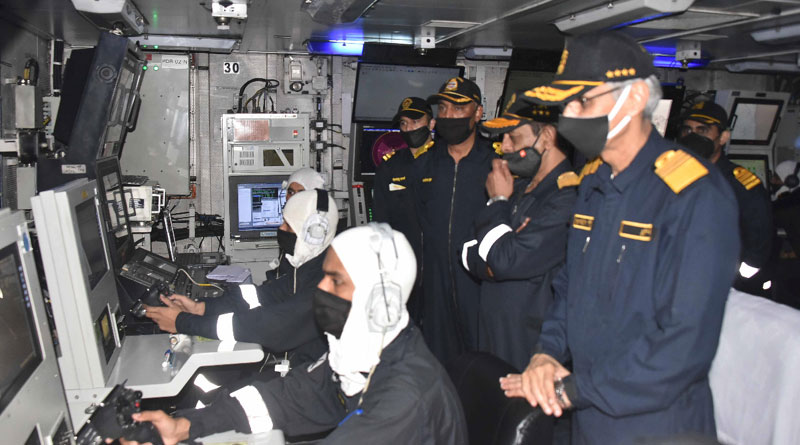 Admiral Karambir Singh, the Chief of the Naval Staff (CNS), reviewed the operational preparedness and combat-readiness of the Indian Navy’s principal combatants on 22 October, 2020.


Addressing the combatants of the Carrier Battle Group over broadcast from Vikramaditya, CNS complimented them for continuously maintaining peak combat-readiness and high tempo of operations over the past months, in spite of COVID-19 related challenges.

The Indian Navy has remained mission-deployed and combat-ready across the IOR, even through rough seas during the monsoon period, towards maintaining the maritime security of the nation.  He highlighted the nation’s appreciation for the Navy’s contributions in ‘Op Samudra Setu’ towards for repatriation of our distressed citizens from IOR countries and towards providing medical and logistics assistance to our friendly neighbours in the IOR, as part of ‘Mission SAGAR’.  He expressed satisfaction at the high levels of motivation and reiterated that the Indian Navy has the best human capital manning our platforms.

Giving an overview of the prevailing security situation, he stated that the Navy would continue maintaining a high-tempo of operations in coming months.  He also complimented the Carrier Battle Group and its combatants for accurate and effective weapon firings, which left no doubt about the Navy’s readiness to meet any emergent contingencies.  CNS highlighted that tri-service synergy and coordination has peaked with establishment of the Department of Military Affairs as was visibly demonstrated in the joint response of the three Services to recent events.

CNS also advised continued compliance of protocols by naval personnel and their families, in regard to COVID-19 pandemic.

CNS returned to Goa on completion of activities at sea and visited the Naval Aircraft Yard.  He thereafter departed for New Delhi and was seen off by the FOC-in-C West.

Concurrent with CNS’s review of combat readiness on the Western seaboard, the Indian Navy’s Anti-Submarine Warfare (ASW) capability was further augmented by commissioning of ASW Corvette Kavaratti by General Manoj Mukund Naravane, Chief of the Army Staff, at Visakhapatnam, on the Eastern seaboard.  Designed by the Indian Navy and built at Garden Reach Shipbuilders and Engineers Ltd, Kolkata, the ship is a fine example of Atmanirbhar Bharat.

Indian Navy continues to maintain a high tempo of operations and combat-readiness despite the COVID-19 pandemic by adhering to stringent protocols onboard warships, submarines and aircraft squadrons and bases, and is fully prepared to tackle challenges in the maritime domain, in coordination with Sister Services.