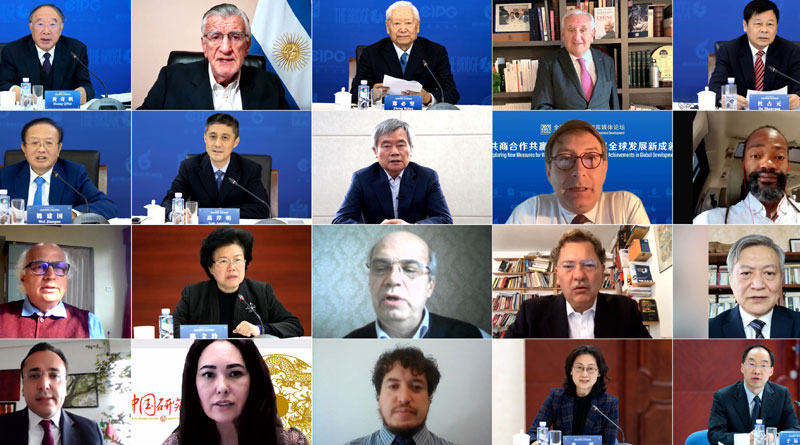 Important issues concerning the Chinese economy and society are being discussed at the Two Sessions. As an Indian, I wish all success to these deliberations.

The world has just begun to emerge out of the dark shadows of the Covid-19 pandemic. It was the worst public health crisis in the recent memory of most nations in the world. It also precipitated one of the worst economic crises for the global economy and also almost all the economies in the world. Given the scale and global spread of the humanitarian adversity, there ought to have been much greater and closer international cooperation among nations—especially big nations—to fight the pandemic. Sadly, national differences, disputes and prejudices stood in the way.

It is commendable that both India and China have helped many countries around the world with vaccines. But India and China should have cooperated more in vaccine research, manufacturing, and distribution.

I am delighted at the positive comments made by Wang Yi, China’s State Councillor and foreign minister, about India-China relations. At his annual press conference during the Fourth Session of the 13th NPC, he said, “The China-India relationship is essentially about how the world’s two largest developing countries get along and pursue development and rejuvenation together.”

Wang Yi added: “On many important issues, our positions are the same or close, due to similar national realities. Therefore, China and India are each other’s friends and partners, not threats or rivals. The two sides need to help each other succeed instead of undercutting each other. We should intensify cooperation instead of harbouring suspicions of each other. As two ancient civilizations next door to each other and as two major emerging economies with over 1 billion people each, we have broad common interests and tremendous potential for cooperation.” These observations by China’s leadership echo the sentiments of all the peace-loving people in our two countries.

We in India highly appreciate the fact that, despite the difficulties posed by the Covid-19 pandemic, China has achieved three landmark successes in 2020. First, at a time when all the major economies witnessed contractions, China achieved a GDP growth rate of 2.3 per cent. Indeed, in the last quarter of 2020, its GDP growth rate was 6.5 per cent year-on-year. This shows the innate resilience and strong fundamentals of the Chinese economy. Second, in 2020, the size of the Chinese economy crossed the milestone of 100 trillion yuan (USD15.42 trillion). Third, and foremost from the perspective of humanity, China succeeded in completely eradicating absolute poverty. Within the past eight years, China lifted as many as 100 million people out of poverty and provided them decent living conditions. This achievement has great lessons for India and all the developing and underdeveloped countries around the world.

I would like to present four thoughts on how win-win cooperation among nations and peoples can lead to a new type of global development with shared benefits to all. First, the rise of China is the most important development in the contemporary history of the world. It has accelerated changes in the world economic and political order. The world has no longer remained unipolar; it has become multipolar. No longer can one country dictate terms to the rest of the world—in economy, politics, international relations or the governance of international and multilateral organizations. This is an extremely helpful development for promoting global democracy. However, those who dominated the old world order are not reconciled to losing their power and influence, which is why they are trying desperately to contain China. In the economic sphere, they are doing so by trying to break and disrupt global industrial supply chains and value chains—in the name of reducing dependence on China. In the strategic sphere, they are trying to build a NATO-like alliance in Asia in the form of the so-called Quad. Both attempts are doomed to fail. Therefore, it is the duty of all nations to ensure that the world economy remains open and does not become decoupled and disrupted for political considerations. The world order must become more multilateral, and not divided into blocks.

Second, we cannot deny or ignore the fact that global development is deeply unbalanced. Even though China has succeeded in eliminating absolute poverty, nearly 10 per cent of the world’s population—that is, nearly 700 million people still survive on less than USD2 a day. The World Bank estimates that an additional 100 million people could fall into extreme poverty in 2020, with the total rising to as many as 150 million by 2021, because of the COVID-19 pandemic. It is a cruel paradox that the number of billionaires has increased during the pandemic, and indeed the wealth of these billionaires has gone up. Therefore, it is not enough that the global economy should recover fast after the crisis. Rather, making the world free of poverty, and also bridging wealth disparities, must become a primary goal of global development.

Third, it is not enough that the global economy recovers quickly. Rather, it should lead to a new green, clean, equitable and sustainable development. The new type of economic growth should reverse the enormous damage inflicted upon the environment and the planet’s fragile and finite ecological resources. Here, major economies like the United States, China, Japan, the European Union and India have a bigger responsibility to make a transition to low-carbon, carbon-neutral and carbon-recycled economic development. This calls for adoption of new green and clean technologies. This also calls for extensive cooperation and collaboration among major economies to reach the goals and targets set in the Paris Agreement.

Fourth, global development and global security cannot be separated. There cannot be global development without world peace and security for every nation. Therefore, nations—especially big and powerful—must eliminate all their nuclear weapons and other weapons of mass destruction. They should also reduce their military expenditures and move forward in the direction of a non-militaristic international order. Differences and disputes must be resolved through non-military means. In this context, India and China, two great Asian nations, should show the way to the rest of the world. We should peacefully resolve all our differences in the light of the wisdom of our two ancient civilizations. Furthermore, India and China should join hands to build cooperative relations with all the countries in the region, including the relations between India and Pakistan.

In my view, this is the road to realizing the noble vision of ‘building a community with a shared future for humanity,’ which Chinese President Xi Jinping has been articulating consistently, and which the entire international community should support and make it into its own vision.

(The author is the founder of the Forum for A New South Asia. This article is an excerpt from his speech at the Think Tank & Media Forum on Global Economic Development. Sponsored by China International Publishing Group (CIPG), China Institute for Innovation & Development Strategy, La Fondation Prospective & Innovation, and the Bridge Tank, the forum is organized by China Pictorial Publications, Academy of Contemporary China and World Studies, China Internet Information Center, CIPG China Book Center, and Bosheng International Cultural Communication Co., Ltd)