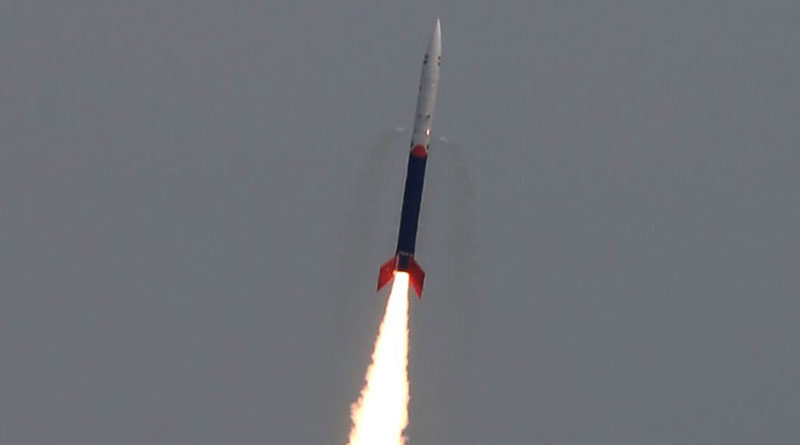 India’s first-ever privately designed and built rocket from India took off from the Satish Dhawan Space Centre, Sriharikota, Andhra Pradesh on November 18. The historic launch is enabled by the Indian National Space Promotion and Authorization Center (IN-SPACe), Department of Space (DOS), following their authorization of the maiden flight of a private Launch Vehicle by the Hyderabad based space start-up Skyroot Aerospace.

According to a press statement from the IN-SPACe, “This heralds a new age for the Indian space programme and etches a significant milestone in accordance with the policy reforms the Government of India is envisaging for the space sector.”

Skyroot launched its maiden rocket under the launch mission named ‘PRARAMBH’ meaning ‘the beginning’, signifying a new era for the private space sector in India and the first mission for Skyroot. The Prarambh mission was unveiled by ISRO Chairman, Dr. S. Somanath in Bangalore on November 7 following the technical launch clearance issued from IN-SPACe.

The rocket Vikram – S is a single-stage solid fuelled, sub-orbital rocket developed over two years by incorporating advanced technologies including carbon composite structures and 3D-printed components. Equipped with a gross lift off mass of 545kg, and payload mass of 80 kg, Vikram-S carried with it three customer payloads, which will map the measurement and validation of certain flight parameters and payload integration processes.

Standing witness to this historic flight, Union Minister of State (Independent Charge) Science & Technology; Minister of State (Independent Charge) Earth Sciences; MoS PMO, Personnel, Public Grievances, Pensions, Atomic Energy and Space, Dr Jitendra Singh, said, “Today is a historic day, which marks the beginning of a new dawn – a new ‘Prarambh’ in the journey of India’s Space sector. This success bears testimony to the vision of Hon’ble Prime Minister Shri Narendra Modi, for opening up the space sector for private stakeholders in June 2020 that has enabled unlocking of the immense potential of the Indian Space Sector. It is a major step forward by India to developing its Space ecosystem and to emerge as the leader in new space frontiers.  This is indeed a turning point in India’s start up moment. My heartiest congratulations to Team Skyroot, ISRO and IN-SPACe for accomplishing this commendable feat in a reasonably short period of time.”

Dr. Pawan K Goenka, Chairman of IN-SPACe, Department of Space, said, “India holds tremendous potential in space and has been an enabler of epoch-making space missions for decades. This maiden rocket launch for Skyroot Aerospace is perhaps the most important milestone for the Indian private space sector since the space reforms announced by Government of India and hints at the rapid transformative journey we’re witnessing in India’s space sector. Though one small step, it is a giant leap to demonstrate the capabilities of the Indian Space sector. Heartiest congratulations to all involved in the success of ‘Prarambh’ mission. A new space journey has begun.”

The lift off of VIKRAM-S from Sriharikota happened at 11.30 IST today. The ranging and tracking operations for VIKRAM-S were handled by SDSC SHAR facility at ISRO. Telemetry data was captured by ISTRAC station of ISRO and relayed to the control room.

The launch of the Skyroot VKS rocket has been possible with the seamless joint efforts of various ISRO centres including SDSC SHAR, ISTRAC and VSSC, Skyroot team and IN-SPACe. The Technical Mission Readiness review committee members from ISRO and IN-SPACe rigorously reviewed launch vehicle and integration preparation and gave final launch clearance.

Ecstatic with the maiden launch, the Skyroot founders Pawan Kumar Chandana and Naga Bharath Daka issued a joint statement, “We are very excited to share that we scripted history today by successfully launching India’s first privately developed rocket Vikram-S. This mission has been executed in record time only because of the invaluable support we received from IN-SPACe and ISRO, and the technology talent that we inherently possess. Our pathbreaking mission, ‘Prarambh’ is dedicated to the Indian Private sector, which has hugely benefitted from the reforms that were guided by the Govt of India and its vision’’

The Vikram-S rocket flight is a technology demonstration flight to showcase the capabilities of the company. The rocket will help validate the technologies that will be used in the subsequent Vikram-1 orbital vehicle of Skyroot that is planned for launch next year, subject to technical clearance by IN-SPACe. The Indian National Space Promotion and Authorisation Centre (IN-SPACe) has been operating as a single-window, autonomous nodal agency of Department of Space (DOS) to boost private space sector economy in India. It has given five authorizations to the Space NGEs for undertaking space activities in India, in six months and signed Sixteen MoUs. Till date, IN-SPACe has received more than 150 applications from Space NGEs for Authorization, Facilitation, and Promotion. In their continued efforts to give India’s space sector a new and dynamic dimension, IN-SPACe’s enabling of Skyroot’s launch vehicle initiates a new chapter in India’s space domain.