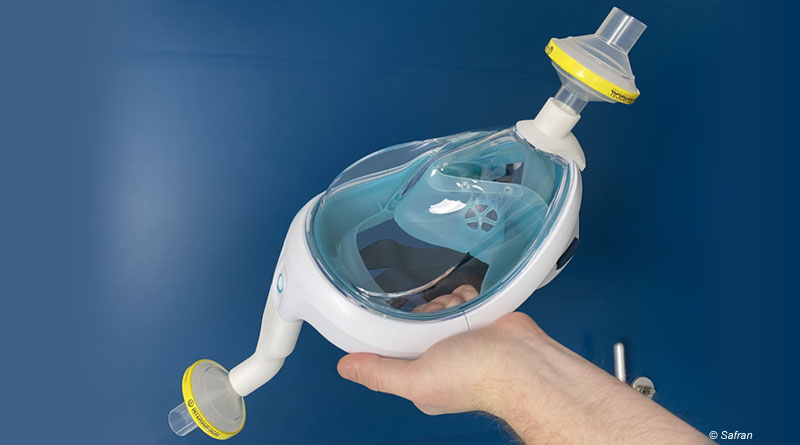 Safran has adapted the Easybreath Subea snorkeling mask from sports retailer Decathlon to protect medical personnel from airborne droplets that could transmit the coronavirus, in conjunction with the engineering firm Segula Technologies and with support from the French Armed Forces Biomedical Research Institute (IRBA).

According to the Press Release, “Safran and Segula Technologies are offering open access to the files needed for 3D printing, based on a free license, thus allowing hospitals and healthcare professionals to make their own adaptation kits. Safran has already 3D-printed these kits, and is providing 200 modified masks to university hospitals.”

Safran and Segula Technologies sought a solution that could be quickly put to use, a condition met by the Decathlon Easybreath mask, available in large volumes. Fitted with antiviral filtration cartridges found at hospitals, plus accessories and connectors used in intensive care units, the Easybreath mask fitted with this anti-Covid-19 kit meets the requirements of both caregivers and patients on ventilators.


For caregivers, it provides protection by filtering inhalation via two filters in the mask’s upper and lower ducts. The efficiency of the filters is 99.99%. For patients, the upper duct filters exhalation, which limits contamination of the environment, while still allowing oxygen therapy, while the lower duct is fitted with a respiratory assistance kit. In addition, it can be quickly reused after being decontaminated by soaking.

Doctors who tested this solution found that it complements existing Easybreath adaptations, and also effectively meets their requirements. The modified mask reflects the standard principles of patient oxygen supply: it’s directly opposite the mouth, which makes breathing easier. Tests at IRBA and Henri-Mondor University Hospital in Créteil, near Paris, have proven its effectiveness based on the same configuration: the mask protects the caregiver, limits contamination of the surrounding area and supports oxygen treatments.

Caregivers are highly exposed to the risks associated with air droplets carrying the virus in their daily interactions with patients infected with Covid-19 (ambulance and other transport, stretcher transfer and carriage, work in contaminated environments, decontamination of rooms and equipment, intubation, tracheotomy, etc.). This risk is exacerbated by the fact that patients with respiratory distress need additional oxygen, which may increase the risk of exposure from exhaled droplets and thus the danger of contamination.

“Safran and IRBA are working on a number of projects to support the fight against the Covid-19 pandemic. For the Easybreath mask, they were joined by Segula Technologies, which contributed its expertise in production engineering to immediately gear up for higher-volume production,” the Press Release further mentioned.