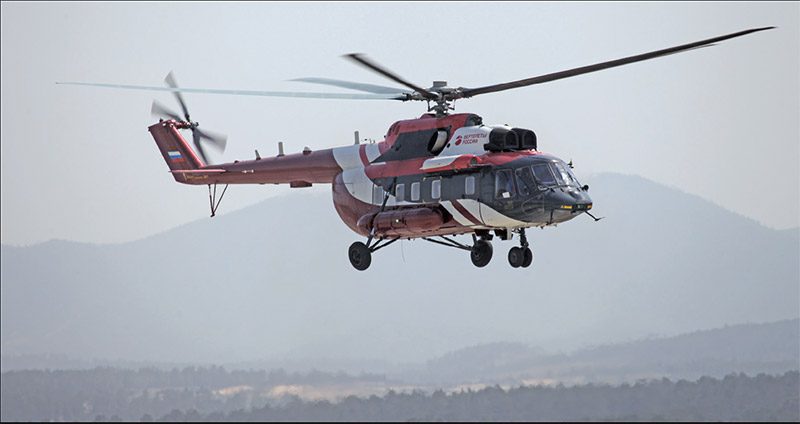 The first production helicopter Mi-171A2 has taken a test flight at the Ulan-Ude Aviation Plant owned by the Russian Helicopters Holding Company (part of Rostec). The first multirole Mi-171A2 will be delivered to UTair-Helicopter Services for experimental operation in polar regions.

Mi-171A2 has become the first Russian helicopter created with the use of advanced digital technologies and put into production. The partial transition to electronic design documentation allowed the company to cut time and resources needed for work preparation. Making parts on numerical control machines with the use of mathematical models has cut the process time and guaranteed the accuracy of manufacturing and saving of materials.

“It’s not just an upgraded helicopter. It’s a brand new machine, with advanced digital technologies on board and entirely different performance characteristics. I’m sure that this development is going to find the broad demand on both domestic and foreign markets – the helicopter is a full-fledged competitor of world-class counterparts in the most popular segment of multirole machines. Potential buyers first of all include the countries using its predecessors – Mi-8/17. Now, we are negotiating the certification of Mi-171A2 in Latin America. Some interest is also being taken by Asian, African, former Soviet Union countries,” said CEO, Rostec, Sergey Chemezov.

Training on experimental prototypes of Mi-171A2 was conducted at the Mil Moscow Helicopter Plant, the helicopter’s developer.

“Mi-171A2 is a brand new helicopter with an advanced flight simulator and up-to-date airborne equipment. It retained all the advantages of its predecessors from the Mi-8/17 family, but in order to use its potential in full and to assimilate its new capabilities, it is necessary to undergo classroom and practical training. Our pilots have done a good job of it and are now ready for mandatory flight tests on all the machines delivered to our clients”, said Managing Director of Ulan-Ude Aviation Plant, Leonid Belykh.

According to the chief test pilot of Ulan-Ude Aviation Plant V.Matveyev, flights on Mi-171 and on Mi-171A2 are quite different. The digital navigation instrumentation of the avionics set KBO-17 with display data indication allowed reducing the crew to only two people and at the same time changed the load on commander and co-pilot. “Different load and different responsibility for pilots: Mi-171A2 has a new control system, a more sophisticated cockpit and navigation instrumentation.”

The credit for the design of the controlling equipment for the cutting-edge digital equipment of the Mi-171A2 helicopter goes to specialists of Ulan-Ude Aviation Plant.

The monitoring panels produced in U-UAZ are used for on-the-spot checks of the purchased components and systems in the helicopter. The experience of designing and producing such equipment may be used in the future production of the Ka-226T helicopter.

As the managing director of the U-UAZ JSC Leonid Belykh said, ‘Given the production plans of the plant, which involve state-of-the-art technical production, our task is to do our best in mastering the process of designing and manufacturing the hi-tech controlling equipment”.