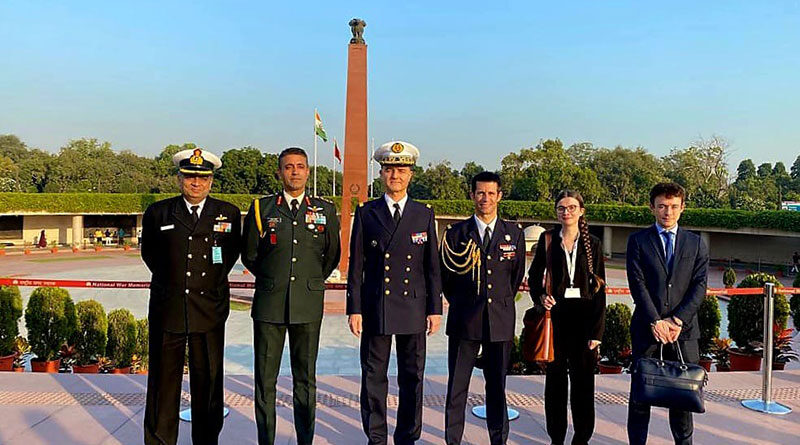 Head of International Relations, French Navy, Rear Admiral Jean-Mathieu Rey paid an official visit to India this week to participate in the Indo-Pacific Regional Dialogue (IPRD) organised by the National Maritime Foundation (NMF) as well as for bilateral engagements on naval cooperation in the Indo-Pacific. He began his visit by paying tribute to India’s soldiers at the National War Memorial in Delhi.

In his speech at IPRD 2022 on November 23rd, Rear Admiral Rey highlighted France’s direct stakes in the Indo-Pacific through its territories, citizens, and military presence in the region, and outlined the French strategy for promoting stability, security and prosperity in the Indo-Pacific along with key partners such as India.

He called on the navies of Indian Ocean Rim countries to increase their cooperation under multilateral bodies, such as the Indian Ocean Naval Symposium (IONS) chaired by France this year, and the India-led Indo-Pacific Oceans Initiative (IPOI), and to strengthen their interoperability for the common good.

“Given the manifold challenges in a region as vast as the Indo-Pacific, France is keen to intensify dialogue with all like-minded partners and further operationalize our joint initiatives. This is also our agenda as the current chair of IONS. The navies of the Indian Ocean countries have a duty to their fellow citizens to act for their security and prosperity. In this regard, I would like to highlight the success of the IMEX 22 naval exercise jointly organized by France and India in March off the coast of Goa, which brought together the Navies of several IONS countries on the theme of Humanitarian Assistance and Disaster Relief. These efforts under IONS are also fully in line with the goal of operationalizing the IPOI programme led by the Indian Navy. On a bilateral level, Indo-French naval cooperation is increasingly ambitious in scope. We are now capable of conducting joint patrols in the Indian Ocean. We see the Indian Navy as a key net security provider in the region,” said Rear Admiral Rey.

During his visit, Rear Admiral Rey visited the Information Fusion Center – Indian Ocean Region (IOR), where France was the first foreign partner to post a liaison officer. He welcomed the continuous increase in maritime information sharing between France and India, which serves our two nations’ maritime domain awareness and capacity to ensure maritime security in the region.