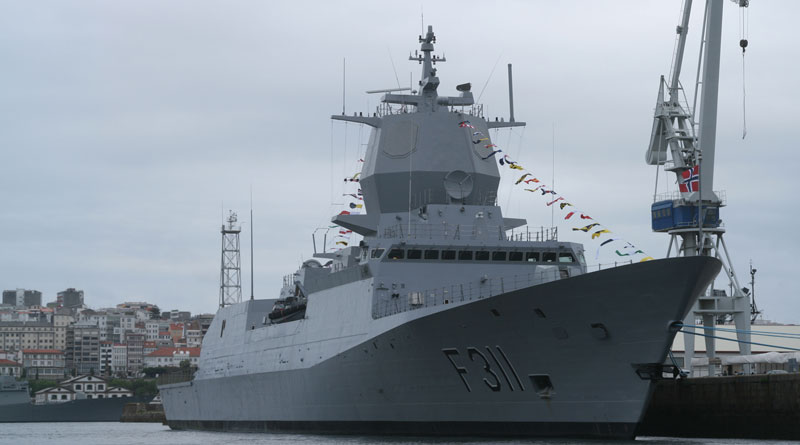 The Norwegian Defence Material Agency (NDMA) congratulated Navantia and its subcontractors for the successful completion of the tropicalisation of HNoMS F-311 Roald Amundsen, second of the Fridjof Nansen Class (F310) that Navantia designed and built for the Norwegian Navy between 2000 and 2011.

This work, for which the contract was signed on July 2020, has significantly improved the cooling capacity of the F311 frigate, which will allow it to navigate in conditions of much warmer ambient and water temperatures than the traditional operational scenarios of the Royal Norwegian Navy.

The modification that took place from January to June 2021 consists of the replacement of the 3 refrigeration plants and the modification and increase of the air-cooling equipment in the engine rooms. The installation of this new equipment has entailed the change of pipes, conduits, wiring, electrical panels, etc. that made this program ‘a great challenge both for the development of all the necessary engineering and for the execution of the works, both dismantling and installation between Ferrol and Norway.’

The F310 was developed with currently inoperative computer tools, so the decision had been made to develop the program already in Siemens NX in order to align it with the new Navantia digital platform. For this, 3D models of the necessary blocks were already migrated, and engineering work was done using this tool.

The whole contract has been conducted under rigid sanitary protocols due to Covid 19, from travel restrictions, meeting restrictions or quarantines of the staff moved to Bergen, which had been an additional challenge for all the workers. NDMA praised the team abilities for adapting to such a situation.

Commander Espen Holtar praised Navantia for their efforts. He said that during the project, Navantia proved itself as a ‘relevant and trustworthy supplier with the knowledge and ability to deliver in accordance to the requirements of the project’. Furthermore ‘it is worth mentioning that NDMA will be using this project as a model for future projects on the Nansen class frigates.’

Navantia liaison engineer and works manager in Norway, Miguel Diaz highlighted the support and collaboration of all Navantia team and other subcontractors as Quest Global, Imafer, Soamar, Electro Rayma and Bulbo.

He added that they had been given 9.5 out of 10 points by the NDMA for the fourth consecutive year, while thanking the team of ‘extraordinary professionals who worked with the highest level of competence, qualification and ability.’