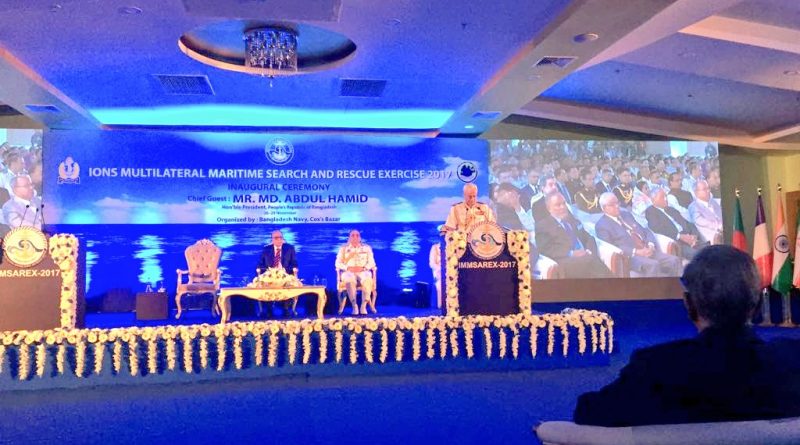 Indian Navy Chief Admiral Sunil Lanba is in Bangladesh to participate in the International Multilateral Maritime Search and Rescue Exercise (IMMSAREX), the first ever operational exercise held under the aegis of Indian Ocean Naval Symposium (IONS) in Bangladesh, from November 26 to 28.

Indian Naval Ships Ranvir, Sahyadri, Gharial and Sukanya along with one Maritime Patrol Aircraft P-8I will be participating in the exercise. The exercise will be inaugurated by Prime Minister Sheikh Hasina on November 27 in Cox Bazar, Bangladesh. Admiral Lanba’s visit is also aimed at consolidating bilateral naval relations between India and Bangladesh and to explore new avenues for naval cooperation.


In pursuance of this aim, he will also hold bilateral discussions with Chief of the Naval Staff, Bangladesh Navy on November 27, and other participating ‘Chiefs of Navy/ Head of Maritime Agencies’. In addition, an ‘Extraordinary Conclave of Chiefs (ECoC)’ meeting of IONS is also scheduled on November 28, at Cox Bazar, which would also be attended by the Chiefs of the Navy. The ECoC would deliberate upon activities being undertaken by IONS in-addition to reviewing the progress made by three IONS Working Group (IWG) namely ‘HADR’, ‘Maritime Security’ and ‘Information Exchange and Interoperability’.

The Navy Chief, who is visiting on the invitation of Bangladesh, will also be gifting ‘War Memorabilia’ for ‘Liberation War Museum’ of Bangladesh.

IONS is an initiative, which was started by Indian Navy in 2008. With time, it has grown into a formidable organisation with 23 member nations and nine observer countries. Continuing with the active engagement within IONS, Bangladesh, the current Chair of IONS is conducting IMMSAREX under the IONS Charter. Indian Navy regularly interacts with Bangladesh Navy through the medium of staff talks and other interactions, which include operational interactions such as port visits, passage exercises, training, and shipbuilding cooperation. There is also regular participation by Indian Navy’s serving and retired officers in Victory Day Celebrations, held in Bangladesh to commemorate ‘Liberation War’ of 1971.