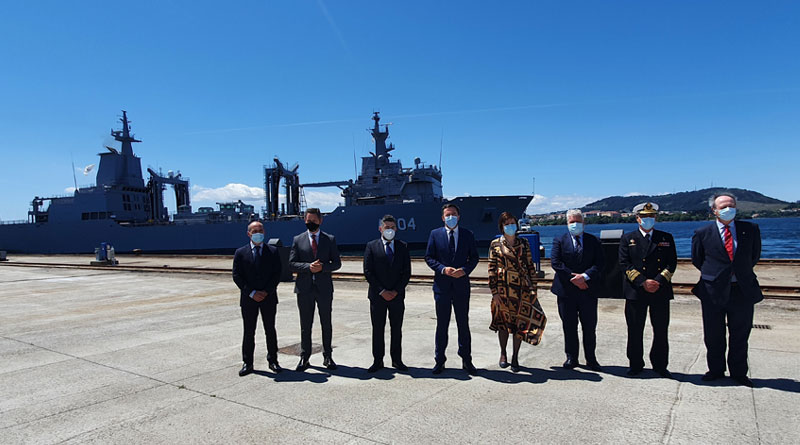 The Stalwart is the second of two supply vessels (AOR) built by Navantia Ferrol for the Royal Australian Navy. The ship will now navigate for 30 days towards her homeport, HMAS Sterling, in Western Australia. Stalwart will then undergo a final fit-out where the installation and testing of the combat and communications systems, as well as some logistics areas, will be completed by Australian industry.

The Australian ambassador to Spain, Her Excellency Sophia McIntyre, participated in the farewell to NUSHIP ‘Stalwart’, together with the president of Navantia, Ricardo Domínguez and the director of the Ferrol shipyard, Eduardo Dobarro.

“Navantia’s role in constructing four classes of ship for Australia has formed an important plank in the development and evolution of our political, economic, military and cultural ties. It’s an honour for Australia to have taken its place as a part of Galicia’s historic and impressive tradition of ship building. Navantia will continue to play a crucial role in providing platform support for these ships in Australia,” said the ambassador.

Australia has relied on Navantia to provide a decisive capacity to achieve the country’s strategic objectives in the maritime field. Be sure that Navantia is and will continue to be your partner, said Ricardo Domínguez.

The president of Navantia especially recognized the efforts of the workers and highlighted the importance of the next program for the Spanish Navy in which the shipyard is already embarked, the frigate F-110, which will be a lever for growth and employment.

The director of the shipyard, Eduardo Dobarro, underlined “the knowledge, know-how and effort made by the workers, both of Navantia and its collaborating industry, especially in such a delicate situation, caused by the pandemic”.

After the speeches, the rope launching maneuver was carried out and the anthems of Australia and Spain were interpreted with the last one.

The contract for two AOR vessels was the fourth signed between Navantia and the Commonwealth of Australia, after the construction of two LHDs and its 12 landing crafts and the design and transfer of technology for three AWD destroyers.

This contract for the two AOR vessels also includes their sustainment, for which Navantia Australia is developing an advanced asset management model to support the life cycle during the first five years. Likewise, it will also require an important participation of the Australian industry that will be responsible for the installation and testing of elements of the combat and communications systems, as well as some logistic areas. After completing these works, the ship will be delivered to the Commonwealth of Australia on August 31.

Australia is a strategic client for Navantia. When the second AOR is operational, the Royal Australian Navy will have in service 19 naval units designed by Navantia. In addition to supporting the life cycle of AOR vessels, Navantia Australia is involved the support of all other units.