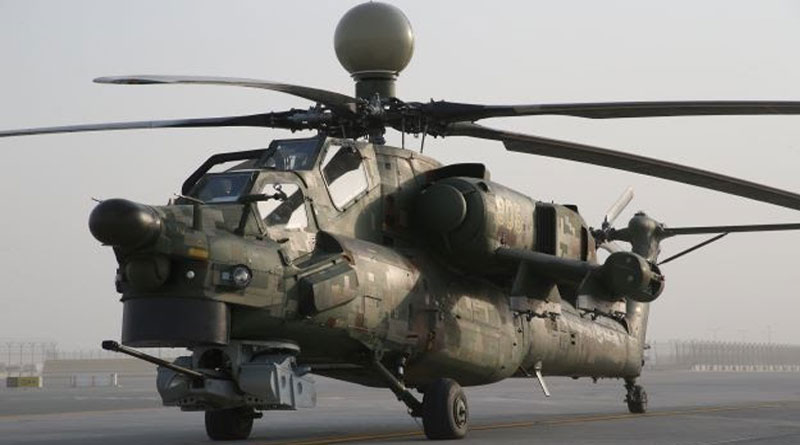 Russian Helicopters holding company will demonstrate a modern Mi-28NE combat helicopter abroad for the first time. The export modification of the ‘Night Hunter’ will be presented both at the static exposition and in the flight programme of the Dubai Airshow 2021, which will be held from November 14 to 18 in Dubai, UAE. Another modern Russian attack helicopter Ka-52 Alligator will also take part in the Dubai Airshow for the first time.

This year, the export versions of the Mi-28 and Ka-52 will demonstrate to the guests and participants of the air show complex aerobatics and manoeuvres that are used in real air combat. During the airshow, potential customers from the UAE and other countries of the region will also get to study in detail the ‘novelties’ of the Russian helicopter industry at the static display.
Mi-28NE ‘Night Hunter’ is designed to search for and destroy tanks, armoured and unarmoured vehicles, as well as enemy infantry on the battlefield and low-speed air targets. The helicopter is capable of operating day and night in simple and difficult weather conditions. Among the advantages of the vehicle is resistance to combat damage, which is achieved using the latest materials and design solutions. The helicopter is distinguished by the lowest possible visibility for ground air defence systems. In addition, it is equipped with an integrated avionics suite. Russian Helicopters claims that Mi-28NE has ‘outstanding’ manoeuvrability, it can perform a whole range of complex aerobatics. The Mi-28NE was demonstrated at the Moscow Air Show in 2015, for the first time. In 2016, the first export deliveries of the helicopter were made.

Another debutant of Dubai Airshow, the Ka-52 Alligator reconnaissance and attack helicopter, can provide target reconnaissance, target distribution and instrumental target designation. The rotorcraft is used for fire support of troops, patrolling, and escorting military convoys. The Ka-52 ‘Alligator’ is equipped with devices for reducing visibility, an electronic protection system and active countermeasures. High flight characteristics of the helicopter provided by the coaxial rotor system allow it to quickly manoeuvre in a confined space to take a favourable attacking position. The Ka-52 has high crew protection, modern automated systems to facilitate piloting, and is also easy to maintain on the ground.