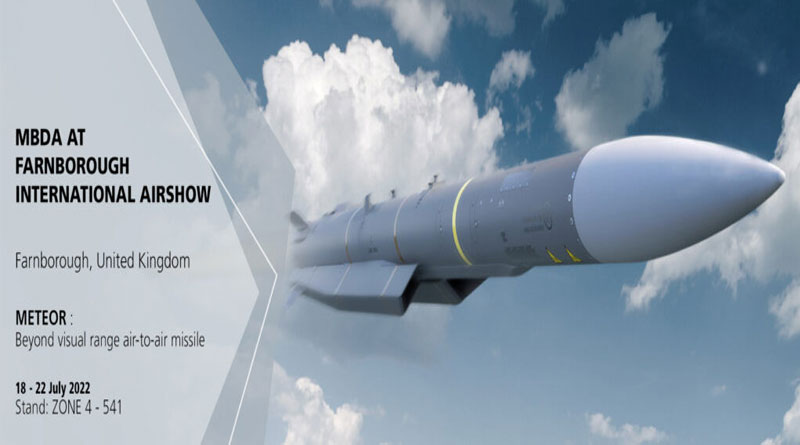 The Farnborough International Airshow made its return on 18-22 July 2022. For decades, the air show has been the global platform for the aerospace and defence industry and MBDA will be showcasing its innovation to a truly global audience, face-to-face.

You’ll find us located in Zone 4 on Stand 541 where you will be able to see a range of the solutions and services we provide.

As the European leader in missile systems, we can provide a comprehensive weapon package to any operator of current combat aircraft, including Eurofighter Typhoon, Rafale, Gripen and F-35.

This includes Meteor, the Beyond Visual Range Air-To-Air Missile with an unrivalled no-escape zone – several times that of current medium range air-to-air missiles. As well as SPEAR (known in UK service as SPEAR3), a first-of-class network enabled miniature cruise missile.

MBDA has secured contracts to integrate these weapons onto the US F-35 aircraft, giving operators something new to consider adding to the F-35’s capabilities as part of the aircrafts’ loadout.

Also on prominent display is Dragonfire. The cutting-edge laser weapon being built for the UK Ministry of Defence by the UK Dragonfire consortium, under contract to Dstl. Led by MBDA, the consortium sees us working together with the best of British industry in Leonardo UK and QinetiQ.

MBDA’s “Collaborate to Innovate” stand was put up in Hall 4 Stand 4541, where the company met all suppliers, SMEs, research and technology organisations, universities, trade organisations, laboratories and institutes at the show who are interested in building relationships and partnerships that deliver innovation and technical excellence.

As a partner in Team Tempest, MBDA exhibited in Hall 5 on the Future Combat Air System stand alongside BAE Systems, Leonardo, Rolls Royce and the Ministry of Defence.